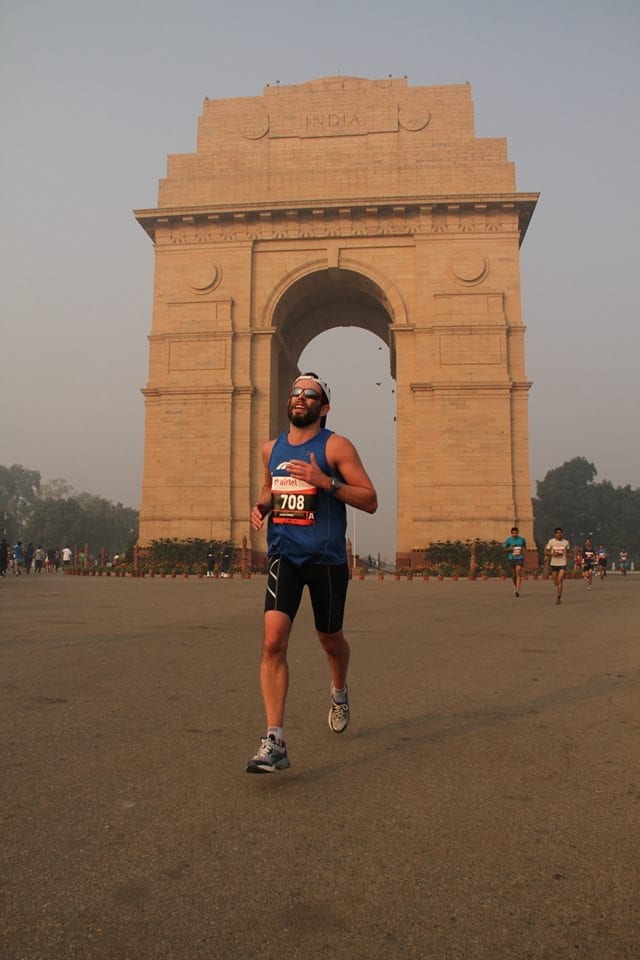 For those who are leading into Ironman Melbourne and worry their their training and race preparation hasn’t gone ‘exactly to plan’, spare a thought for Tri Alliance athlete Glenn Barber who has been preparing for his second Ironman from New Dehli, India….

Glenn recently raced the Dubai Triathlon as a lead in race, and shares with us his challenges of training for an Ironman in a foreign country.

“The Dubai triathlon was awesome, unfortunately I was pretty sick on the day with a virus but still managed to knock a few minutes of my PB so can’t complain there. I think I was just happy to be swimming in open water and riding on a sealed road that my adrenalin took over! There was some pretty pricey bikes there, with many upwards of $10k – there is no shortage of money over here.

The Tour of Dubai was also run over the same 6 days I was bikes and athletes were out in force during my stay there. The triathlon was a great course with a sheltered swim and some of the best roads you’ve seen for the bike, temperature certainly kicked in as the race wore on and was around low 30’s by the finish. Fantastic crowds and support from the sidelines too!

I fly in Friday for Ironman Melbourne and it will be interesting to see how I go this year as it’s been a very different training experience over here in Dehli, India. I moved over for work not long after Ironman Melbourne last year and have been working (and training) here since. I’ve had no proper pool to train in as the Commonwealth Games one has been closed for 3 months! Unlucky for me, it closed 3 days after I finally got a membership – argh!!! So since then, I’ve mainly being using a FREEZING 22m hotel pool that I managed to get access to. You should see the looks I get when I jump in from the local staff. It’s literally that cold that after a swim it takes me about 15 minutes to stop shaking and thaw out! To make things even more challenging, I’ve had no open water swim training aside from my race and short stay in Dubai and 2 swims in Barcelona when I was there 2 weeks ago. Talk about making things a challenge!

All of my bike kilometres have been on the wind trainer at our place. What a mental challenge! Riding solo for that long and not actually going anywhere is mentally one of the hardest things I’ve had to do. The longest I’ve managed so far in one hit was 150km but it does your head in and I do anything during that time to try and keen myself sane! I’m secretly hoping the wind trainer kilometres might actually be of benefit compared to the constant start/stopping on the road sometimes. (that’s what i’m telling myself anyway!) 😉

All of my run training has been around the same 6-7km loop as well. No varietty, no change of scenery. The same route each session, each long run…. It has certainly taken plenty of focus to keep at it, but managed to get there and build the run km’s up enough to give myself every chance on race day.

As long as I don’t get 3 flats this year I’ll be happy, although after last year I’m not taking anything for granted.

Look forward to catching up with everyone when I land in Melbourne.”