Shepparton 70.3 Half Ironman – the race that stops Shepparton.

Home » Shepparton 70.3 Half Ironman – the race that stops Shepparton. 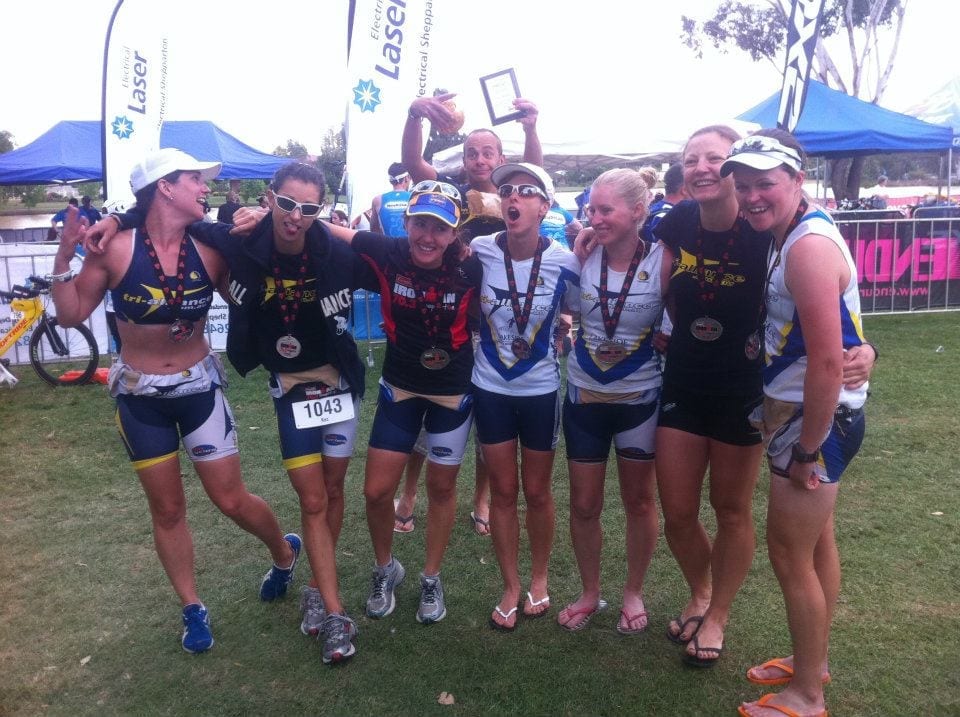 Tri alliance is about to descend on Shepparton for this weeks 70.3 Shepparton Half Ironman event, with a field of 53 athletes racing the individual event. Here is a summary of the race (form guide) in racing parlance.

Let’s start with the F25-29 and look at the form of Nicky Scheltus, starting in her first 70.3 event, the filly from Kurunjang has been training steadily and looks ready to roll, it is hard to get a read on the form line here so your best bet is to watch the markets and look for any movement.

In the Female 30-34 age group (something akin to the 2yo fillies) we have a 10 starter field, led by last year’s winner Sarah Grove who has stepped up an age group, Sarah will be challenged by Marina Jurjevic who is coming off the back of a Kona debut, word on the street is that Marina may have put on a little condition since she has been in the paddock

following Kona. Newcomers to the event look well weighted and are certain to give a good performance, look for a good showing from Lisa Dominguez fresh from a 7th placing at Noosa and primed for the event. Kathryn Proctor, Brianna Scarlett and Kerri Whitney are all returning to the event and have put in some excellent work on the track. I’m expecting big things from these three as their hard work has been impressive. Late entrant Meghann Blakeman is sure to give a bold showing along with Evelyn (I’m so ready to do an Ironman) Ling and Viola Nadj, who like the returning athletes have been very solid and consistent with their training. The dark horse of the age group is Juliet Vemeulen, the veteran marathon runner has been secretly working out on the bike and may surprise during the event.

The F35-39 looks to be a two Filly race with Sheridan Brown and Magda Urbanek contesting. Magda was disappointed with her last start performance and is out to make amends in this race, whilst Sheridan has been quietly going about her training and looks set for a great race.

The mares race F40-44 (no offence intended, but let’s face it, once your past forty I think the filly terminology is out of the question) looks to be a race in three, the veteran Half Ironman competitor Jeanette Linehan is sure to be challenged by the two newcomers to the event in Michelle Grocock and Lidia Ursini. Lidia has been working solidly over the past six months and is ready to give a good account and Michelle has been steadily building towards this event as part of her preparation for the Big One in March. This should be keenly contested and we all look forward to seeing the results.
The M30-34 is a cracking field and the competition looks hot, twinkle toes Nick Scissons, the Half Ironman junkie won’t have everything his own way out on the Shepparton track, I’m expecting a fast showing from Nathan Sims and Brett Archbold, Nick who has recently raced Mandurah and Port Macquarie is looking for the trifecta, however, I think the winner will come from either of the two boys, Nathan on the back of his smoking marathon performance and solid training over the past few weeks against the svelte gazelle in Brett. Just make sure you keep the abs hidden until after the event. I’m expecting a solid performance from Chris Tibb (first timer) who raced very well in Noosa and Luc Riley, let’s hope all that work with power pays dividends. A special mention to Peet Vermeulen who will be racing for the first time and carrying the additional weight of expectation, if his lovely wife beats him across the finish line look out. My money’s on Juliet to take both line and time honours in this year’s event.The colts race M25-29 is a lonely affair with Brinn Tavener racing the age group, the young pup’s first challenge is to survive the swim, not known for his wet track form, the boy from Tarneit will need to make sure he follows a good line through the swim and hangs on to the feet of other more fancied runners. Once on dry ground look out for a bold showing.

The biggest field of the day is in the M35-39 with 12 starters, the top weights Brad Campbell, Darren Schonewille (previous sub 5 hour performance) and Andy Wood-Rich (TA Vic Ambassador) all look to have reasonable claims, the pressure will be on from the word go, Head Coach and last year podium finisher direct from Kona Ollie Allan is expected to once again perform and will provide plenty of challenges along with Sean Helmot, look for a strong finish from Sean. A couple of unknowns in this field, Michael Grau-Veliz is stepping up in distance, from the World Championship Sprint Distance to final to the 70.3 Half Ironman, it is hard to get a read on this sort of form in betting parlance you should keep the boy safe. I don’t know a lot about David Stokie so you should keep him safe in your betting and box him in with your multiples. It will be interesting to see if Daniel Steadman makes it to the starting line on time, he is forever late to the wind trainers sessions, let’s hope this form is not replicated on race day. Ironmen Maurice Caleca and Jason Nicholl are in the field and you should keep these to safe as we haven’t seen a lot of them in training. That leaves first timer  and Tri alliance coach Des Minton and the lightweight of the field Ariel Grana. Des has been solid in his training and should give a good showing, Ariel I consider to be a very good outside chance to finish in the top three of the age group, with some very consistent training performance over the past six months, he has tapered well and looks like he is coming good at the right time.

A smallish but diverse field in the M40-44 age group, I’m installing Jody Biddle as equal favourite with Anthony Leverington, again consistency has been the key for Jody over the previous six months and he is building towards Busselton, I expect a very forward showing. Levo has gone about his business clocking up the miles, a strong finish in the Melbourne Marathon four weeks ago looks to have prepared the bald fella for a solid race. Watch out for Paddy Fitzgerald, Tim Grant and Steve Garnham in the field, all first timers who have been training well over the distances. Nothing like a little inside information to help you with your selections, I spoke to the great Jay Mueller in the stalls at Flemington and he wasn’t too confident in his preparation, reckon he was just going around, you will have to take that with a grain of salt and keep him safe in your betting. The great unknown here is Dean Hawkins, goes quietly about his business, we don’t see much of him out on the track, just turns up for the event and next thing you know there he is crossing the finish line. Should be a great race.

7 men racing the M45-49 age group, “stallions???? and geldings?????”, this is a hard field to pick, Pete Rainey would have to start favourite here, I’ve seen him out on the training track, although a little lame from a niggling achillies injury, having said that Anthony Churchward continues to deliver PB’s at every event, has trained the house down and has the stats to prove it, look for a strong showing from the big fellow at his first attempt at 70.3. I’m also expecting a solid performance from the cagey Dale (the Flounder) Beehre, a lot of not so secret training has gone into this event, solid rides and runs, leaving at 5.00am, taking weeks off and training twice a day, should be a big one, the key will be the Flounder’s efforts in the water. I’m not sure about Peter Hinrichsen’s form, a lot of mind games going on here, posting performances on Facebook, complaining about the Garmin satellites, too much of the slow, possible a ruse so watch the betting ring to get a quality guide on this. Not a lot to be said about Chris Mutimer, been overseas a lot and just quietly going about things in the background, again watch the betting as a guide. A couple of stalwarts to round out the field, Paul Venner has been out and about training solidly and preparing himself for the race, spent some time in an overseas training facility let’s hope he hasn’t put on too much condition. Rounding out the field, Rohan Belmore, look for a solid swim sectional followed by a strong bike, has continually cried poor about both these legs and his lack of training, however, every time you speak to the big fella he has been riding out through Humevale or smashing it out in the pool, I expect to see a completely different belmore on the run this year, a huge PB should be on the cards. (As an aside, Rohan believes that this year will be a non wetsuit swim)

And finally, the best for last, a hotly contested field racing the M50-54, John “the Frankston express” is the firm favourite here, the former rower, has been belting out the swim, ride and run over the past few months and is sure to be right up the pointy end of the results, expect a stellar bike leg from the “Uber” biker. Ian (Does anybody call him Ian?) “Roofi” Renouf is the likely challenger, a consistent trainer over the winter months and veteran triathlete is primed and ready to race for this one. Greg “The Zoolander” Nugent may be a little under done for this one, a solid four days at the recent Spring Carnival may have been detrimental to the old fella’s legs. Keep safe in the betting as you never know how this veteran racer will perform. I’m a bit worried about Mark Jenkins , I have no doubt the swim and ride will be solid, just not sure how he will cope on the run without training partner Billie to lead the way, if he looks lost out on the course, give him a cheer and pat on the head to help him on his way.

Hope this gives you an insight into the form for this year’s event, with such a large contingent racing it should be a stellar day for Team Tri Alliance. So good luck to all racing!

See you in Shepparton.