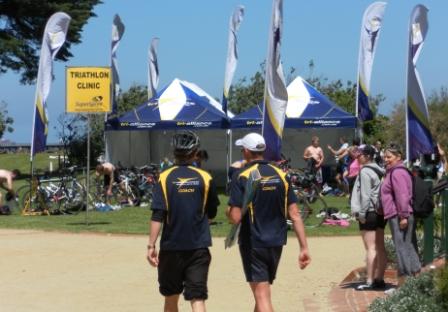 The sport of Triathlon in Victoria is growing from strength to strength especially with emerging races over the Long Course Distance including Ironman Melbourne. The great thing about Triathlon is that there is an event for people of all levels and abilities – and those starting out in the sport can progress through short course races including Fun, Sprint and Olympic Distance Races.

Tri Alliance is the largest Triathlon Coaching Squad in Victoria and is continually searching for initiatives to support athletes, including those new to the sport of Triathlon. They know and understand the importance of developing athletes in the sport for longevity and cater for athletes needs. And their motto “Triathlon – it’s not just a sport, it’s a lifestyle” displays the unique culture that exists within the squad.  Tri Alliance provides professional coaching to improve fitness and performance, training like-minded athletes, while enjoying the ‘social’ network of a group.

Tri Alliance has been a proud supporter of the Gatorade & Active Feet Series in Melbourne for 10+ years and recently became a Major Partner, supporting SuperSprint Events including the Gatorade & Active Feet Tri Series, Nissan Corporate Triathlon Series, Sussan Women’s Fun Run, Hertz/BRW Corporate Relay Run. Through such relationships Tri Alliance endeavours to expand the sport of Triathlon both in Victoria and Australia and enhance the general well-being of society we live in.

The squad has a large beginner base of participants entering into the sport – some with no sporting background, but are simply looking for a new challenge or a lifestyle change. In support of new athletes, Tri Alliance has chosen some up and coming athletes entries into this year’s Gatorade Triathlon Series run by SuperSprint Events – the premier Triathlon Series in Melbourne. These athletes are both new to the sport and have shown dedication and aspirations in Short Course racing.

Tri Alliance has chosen to support Short Course athletes Belinda Griffiths, Xavier Flynn and Meg Takiguchi by providing them with entries into this year’s Gatorade Series and when speaking to these athletes they were over whelmed and excited by this offering of support by Tri Alliance. Xavier has only been dedicated to the sport for 12 months but has already shown potential, winning his age group in the recent Sprint Distance Race in Yarrawonga and having a solid race in Noosa finishing with a 2:11, a 15min Olympic Distance PB.
Bel started her commitment to training from the start of pre season and has improved leaps and bounds and also had a great race in Noosa to kick start the season with her first Olympic Distance race and finishing in a solid time of 2:34. And every ones’ favourite Meg has grown as an athlete and person in her short time in the sport. She completed her first full season of triathlons last year and her dedication to training and improving her own performance has not gone unnoticed by Tri Alliance Coaches.

Bel was excited when Coach Sarah spoke to her about the support “Training with Tri Alliance has become such an important part of my life and I’ve loved every minute of ‘ramping up my training’ over the past year…. I was rapt with how things went in Noosa – I had a ball and I was really happy with my times. It was great to see the training paying dividends. And now I can look forward with even more excitement about continuing to improve over the summer!”

This support for athletes follows from a recent announcement by Tri Alliance in developing a fantastic new initiative the Tri Alliance Ambassador Program. A Program developed by their Coaches to support a male and female athlete of any level, to help them towards their goals for the 2012/2013 Triathlon Season.

Tri Alliance continues to be a leader in Triathlon Coaching and Triathlon Training and is gearing up for another successful Season, kicking off with 50+ athletes competing in the Shepparton Half Ironman next weekend and the first race of the Gatorade/Active Feet Series where 150+ Tri Alliance athletes will enjoy the race at StKilda.