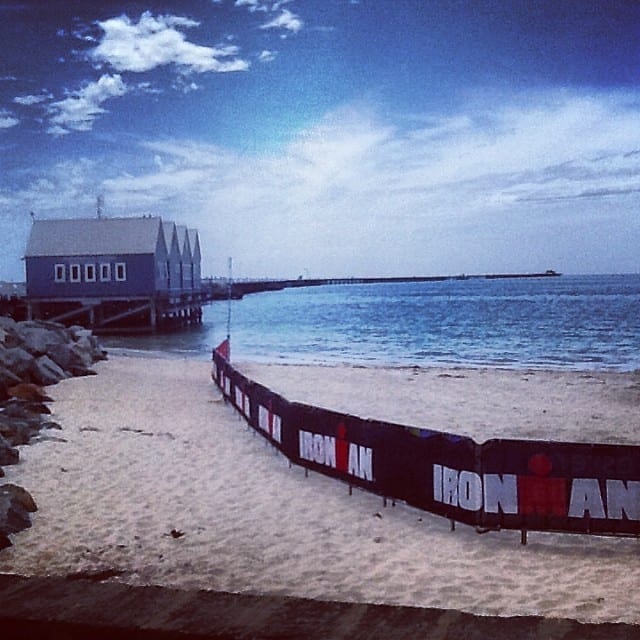 The first of our big Ironman events for the  2013-14 season was held in the magnificent town of  Busselton (Busso), Western Australia. Ironman Western Australia is renowned for crystal blue waters and a golden warm sunshine to match; the event this year surely did not disappoint with near iconic racing conditions. 11 Tri Alliance Victoria athletes whom had been slogging it out over winter were ready to tackle the  picturesque course and achieve their dreams and aspirations. Amongst the team was Busso veteran Greg Nugent whom was making his 5th appearance and TA high performance  athlete Marina Jurjevic who was looking to add another title to her growing list of achievements. We had 4 first timers in Peet and  Juliet Vermuelen, Andy Peters and  Magda Urbanek. Other team members included the flying Jody Biddle who was coming off a superb race in Shepparton 3 weeks earlier, Matty Green, Nick Sissons and Paul O’dowd  who were all chasing bests and solid performances in their respected age groups. Online athlete Geoff Mcdonald had also been putting in the hard yards over winter and was on track for a new personal best.

The days leading into the  race the weather was ideal and  the team relaxed as they went into their  final  preparations for Sundays race.  The nerves  were a little high however coach Ollie had some wise words of advice for each of the athletes individually and the energies were very positive come race morning.

The 3.8km swim would see athletes swim parallel to the Jetty and out into the distant before turning around and heading to shore.  Launching  himself  into the lead early and delivering  our strongest swim of the day was Jody in a sizzling time of 1:02. Jody’s  consistent hard work in the pool was put on display out there and he steamed into T1  looking calm and collected. Following closely behind  was Marina in 1:04, Andy 1:06, Nick 1:06, Greg 1:07, Paul  1:11 and Matty 1:13 and Geoff 1:13.  Stand-out swim of the day went to Peet who displayed how far his swimming has come in such a short time coming in at 1:11. Juliet and Magda both came in with 1:15 which was well under their anticipated goal times and set themselves up for a stellar first Ironman.The alarms blasted at 3am on Sunday morning and to our delight the conditions appeared to  be stunning with the temperature forecast between 12-24 degrees, slightly overcast and the winds very light early on. The swim was clear and calm and the scene was set for a superb day. A few final hugs and motivational chants and it was now in the  hands of our 11 strong athletes to take their dreams  in the cusp of  their hands.

Into the mammoth 42.2km marathon and it was now time for our athletes to dig deep and enjoy the moment of completing the most grueling one day race. As the body fatigues the mind  starts to play tricks  however the strength shown by everyone was both courageous and inspiring to say the least.  As the run came to an end we had Marina absolutely storm home in a run time of 3:22 to take out her age  group in a spectacular time of 9:30. This would see Marina finish 8th overall in the female division and  secure herself a professional license if she chose to accept. Next over the line was first time Ironman Andy in a stunning time of 9:52, closely followed by Jody in slick time of 10:07. We are excited just thinking about what is possible from these two men in the near future. A cluster of TA boys were now in the hunt for bragging rights and next over the line was Matty in 10:24, Nick 10:29, Paul 10:33, Peet 10:41 and Geoff 10:49. A sensational results for all the fellas to go well and truely under the 11hr barrier. Next home was Magda in 11:08, Greg 11:13 and Juliet 11:36.

As the personal victories  sunk in and the proud coaches congratulated the team it became a surreal moment that one would wish could last for an eternity. The team had done us extremely proud and more importantly done themselves proud.  It was now time to bathe in the success and put the feet up for a well deserved beverage.

The Monday would see the team catch up and share their war stories over cold drinks before heading into the presentation dinner and after party. The Zoolander and Irish were in great form early and lead from the front and didn’t disappoint.

For now, its time for our athletes to sit back and absorb the experience before planning their future in the sport. Some have already entered Busso 2014 whilst others require time to catch up on life’s simple pleasures and remind themselves what its all about. If this was your first Ironman we would highly recommend reading the following article by TA QLD Coach Mark ‘Gleeso’ Gleeson.

Ironman Western Australia is a scenic and rewarding course for all athletes, especially for a first time Ironman. Besides the army of flies relentlessly giving us all grief (which I have  restrained myself  from complaining about until now) The Western Australian Coast is the  ultimate getaway race destination.

A Proud Day as a Coach, By Head Coach Ollie Allan
What an amazing day yesterday at Ironman WA as a Coach. Mission accomplished.
The amazing results of Marina Jurjevic with a 9:30.26 was just the beginning. Andy Peters first Ironman smashed 10hrs, Jody Biddle had a cracker swim bike. Huge improvements! Greg Nugent for those who know him. The hard old man left nothing out there to take 30min off his PB. A massive thank you to him for taking this long course team under his wing. Matthew Green had a big confidence boost after fighting injury to come through with a strong result. The hard and finally consistent Paul O’Dowd who had several bad luck issues during his race still had an amazing PB and Nick Sissons ticking another result on the Ironman tally board. Geoff Mac with a big PB, and saving the best for last was Peet, Juliet Vermeulen and Magda Urbanek who I am so proud of finishing their first Ironman race exceeding all expectations. All this sums up the passion and hard work that goes on behind the scenes that makes what we do special. Tri Alliance is not one individual sport, it is a family of many that makes greatness. Thank you to the athletes and the awesome team we have that makes days like yesterday a reality!

From a First Time Ironman Perspective
By Juliet Vermeulen
After a pretty rocky last couple of weeks of training due to all the usual niggles and nerves, a couple of days before race day I was just dying to get out there and race. The atmosphere down at Busso Jetty was pretty interesting as 1500 very fit looking people all checked out one another’s bikes, gear, bodies… We passed the time with a few practice swims to familiarise ourselves with the course and burn off some energy before the big day. When the morning came the weather was nothing short of perfect – I’m sure this year’s Melbourne first timers would have had a bit of race envy going on as we lined up before a swim that would have been no flatter if it had been in a pool!

The gun went, and fast forward a few hours to the best and worst bit – the run. It was awesome to see my team mates out there, and none more so than my main training buddies Peet and Magda. To see them both having such stellar races absolutely made my day and gave me the energy I needed to keep going. The run was the toughest thing I think I have ever done and as I ticked off lap after lap the walks through aid stations became longer and longer. Hitting the carpet of the finish chute though was almost as incredible as what came next – sitting down, tucking into a slice of pizza and hearing everyone’s proud stories about the day. I am really proud of what I achieved out there and would like to thank Tri Alliance for all the support. In particular I’d like to thank Greg – though he demands no recognition, to me and to others he has made a world of difference. His many words of support, encouragement, tough love and good humour were so important to me in these last few months.

Controlling the controllable’s in an Ironman, By Peet Vermeulen
I’ve been doing a little deconstruction of my race at IMWA and thought I would share an aspect of my race with you, as it pertains to one of Greg’s mantras drilled into athletes (I believe it’s also a TA mantra overall) and how it shaped my race at IMWA. I thought it may be useful as I was a first timer with only a couple of years triathlon experience and 1 year participating in long course.

So… As a first timer I had trained with a Garmin. This kind of device is great for analysing data and providing you with real time speed, cadence, averages and pace, among other features. My training and, more importantly, my whole race plan revolved around using my Garmin.

At the swim start I had it on and kept thinking “don’t forget to start your Garmin”. The gun went off and I went for it right in the throng. 5 minutes into the swim I realised I’d forgotten to turn it on! Oh well, I don’t really use it during the swim anyway but I’ll hit start now and track my bike and run. Looked down at my wrist and it was gone! Obviously during some intense underwater hand-to-elbow-to-knee combat in the first few hundred it must have been knocked off somehow. Do Garmins float? No.

I had 2 things to concentrate on immediately: 1) don’t panic and 2) rethink my entire race strategy. I just focused on my swim stroke and remembered that I had the best part of an hour to figure out my new plan. I had never considered this so everything was done in my head on the fly. During the bike I would use course markers and landmarks for nutrition intake, and would drink every 5 “Peet minutes”. In terms of effort and speed, I would use other TA athletes/training buddies as an indication of my pacing and speed, and also breathlessness
/leg fatigue during the 2nd and 3rd laps. My aim overall was always to bike and run consistently so I figured not having a measurement to look at shouldn’t stop me. For the run I decided I would run using a tempo. I have a couple of songs in my head when I run often, and they are usually the same bpm/cadence as a 5:15-5:30 pace. I am fairly good at keeping time so I just figured I would do a tempo run at consistent cadence.

On exiting transition with my bike in hand, Ollie told me my swim time and after I jumped on the bike it sunk in that I’d swam my best-case-scenario swim time (faster than ever). This news set me up for a consistent day and I just kept thinking that if I got through the swim after such a setback, I would be fine on the bike and run.

In the end I had a good first race. I’ll be honest and say that once I had accepted the issue during the swim and remembered to control the controllable, I didn’t think negatively about a single aspect of the day and never once dwelled on the extra weight missing from my wrist…..