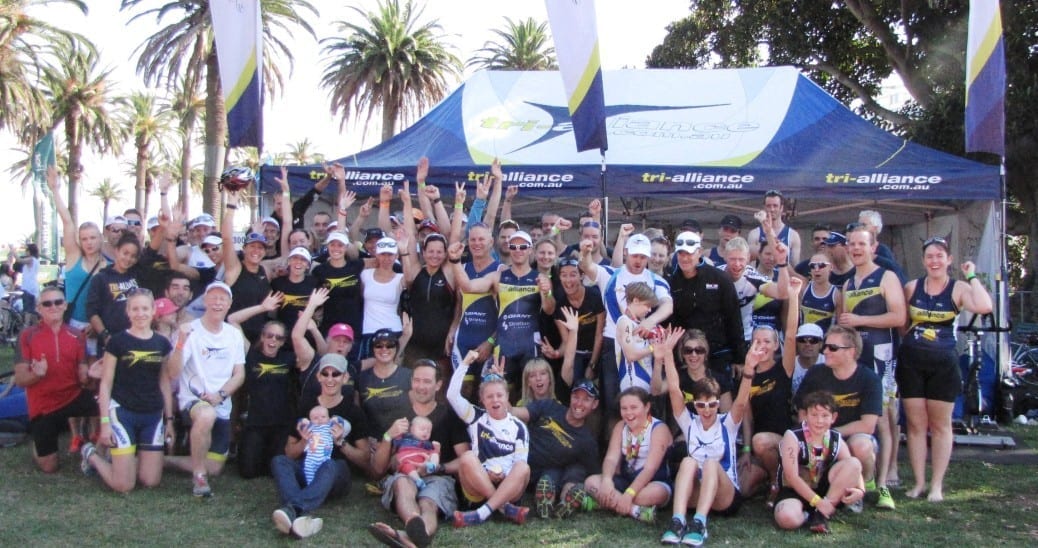 Leading into the last race of the Season and our athletes were pumped for a big days racing. Coming off the back of Ironman Melbourne two weeks earlier everyone was inspired and ready to draw strength and give their last race for the season everything. We had a number of athletes in search of another podium, aiming for a series podium, heading into their first triathlon, or simply ready to finish off the season on a great note!

And what a day to finish on. Melbourne brought out it’s Autumn’s finest, although a little blowy on the bike it was a perfect day to be out in the sun and racing. And race they did!

We didn’t think it possible, but we cracked our highest number of athletes racing – 84 over the two distances, including 73 in the Gatorade Sprint Distance, and 11 in the Active Feet. And when there are that many athletes on course – it can only mean just as many on the sidelines cheering.

Our Ironman Athletes came out in force to re-pay the support to our Short Course athletes and they didn’t let the team down!

“Big thank you to our long course buddies (and non-racing shorties) for your support at yesterday’s final Gatorade race for 2012-13. The cheers made a huge difference and the noise was awesome!” Belinda G

“It was the loudest and most cheer I’ve ever had coming into the home straight. Thanks to the TA TEAM!” John G

“It is great to be a part of such an amazing team of people. Thanks to the supporters who cheered me on and to the other athletes who gave me words of encouragement, a smile or a wave. It makes such a difference. As a new comer to the sport it’s so encouraging and uplifting.” Sharon S

We also had a number of athletes bring along thier kids to enjoy the first ever Jelly Belly Tri Kids event, so well done to the young ones in the family of Sonia Gregoul and Lance Willie’s youngster Zander. Was great to cheer you through the finishing chute! 🙂

Well done to everyone who raced and a big thanks to those who came down and cheered.

TRY-THE-TRI’S – BEGINNER TRIATHLETES!
Coach Bernadette had 14 New Beginner Triathletes graduate from their TRY-the-TRI Course by racing in either the Active Feet or Gatorade Distances and all did super well in their efforts. The skills and fitness learnt during our 6 Week Beginner Triathlon Program are invaluable to those new to the sport of triathlon and everyone showed their best on Sunday. Well done everyone!

ACTIVE FEET MINI TRI: 300m/10km/3km
The longest distance for the season for those in Active Feet, including a number of our Try-the-Tri’s. It’s always fantastic to watch athletes in this distance as they over come their fears, challenge themselves and enjoy their race. Well done to you all!

GATORADE SPRINT DISTANCE: 750m/20km/5km
The ‘true’ sprint distance to finish off the season. The longer swim always slightly favours the ‘swimmers’, but we all know that triathlon is all about being solid in each discipline, and with a solid off season everyone was confident in their training and ready to finish on top.

We had 73 athletes race over this distance including 5 podium finishes and numerous first timers – either to the sport or to the distance. Well done everyone!

There were many other fantastic results and PB’s so well done to everyone again on a fantastic days racing!

SERIES PODIUM PLACINGS
We had a number of athletes pushing for Series places before this race and even more who finished within the top 10 of their age groups overall. So well done to you all on a great season of racing – we look forward to seeing you grow again over the coming winter season (after a nice break that is!) 🙂

SUPERSPRINT TRI CLUB COMPETITION
Our Short Course Sprint and Olympic Distance athletes along with our large group of beginners joining the sport had another fantastic season, finishing second place overall in the SuperSprint Tri Club Competition behind Endurance Team. A fantastic effort by everyone – and not a bad feat after holding the mantle for the past 3 seasons. So a big pat on the back to everyone who raced during the season!

If you would like to find out how Tri Alliance can assist you with your triathlon training, contact us [email protected].