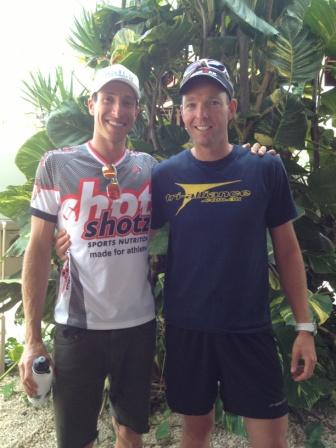 It has been said that this year was the hardest Ironman World Championships in 8 years. Not since 2004 have athletes said the course was as tough as it was on Saturday 13 October 2012. Kona can be deceiving, you can often have cloud cover created by the Volcanoes in the horizon giving you a false sense of security from the heat.  But not even the clouds can shield you from the humidity of the ‘Big Island’ of Hawaii.
Athletes arrive up to 4-6 weeks out from the race to prepare themselves for the most coveted and sought after race on the Ironman Calendar. No expense is spared in preparing themselves to race against the best athletes in the world. But sometimes, no matter how much training you have done, no matter how much time and money you have invested, the Island can claim the fittest, strongest and most prepared of athletes. And that is what makes this race so tough. Tri Alliance athletes prepared, endured and conquered this amazing race, read about how they went and their plans post race.

“My lead up into this race was less than ideal. I had been battling an achilles injury since May which hampered not only my running but my motivation and drive leading into the race. This was hard to grasp at times as the amount of support I had from friends, family and everyone in the squad was amazing. So it was this support that I took to the start line with me. I’d done minimal running, but enough that I knew I could get through the race. After speaking to numerous athletes the best piece of advise anyone can receive in racing their first World Championships in Kona is to ‘enjoy it’. Be grateful for the opportunity to race and enjoy being part of the event and most of all celebrate your achievement. So that’s exactly what I did. “A spectator from within” was how I had prepared myself to race.

I enjoyed the amazing swim, I toughed it on the bike in what felt like a headwind both ways, and then soaked up the run. It was hot, it was humid and it tough – just as I had expected, but I enjoyed it. The Queen K and the famous Energy Lab is brutal, no shade to speak of and the further you run, the less support you have on the sidelines. Athletes can be broken here in a matter of minutes. But turning and heading for home, back down into the finishing chute on Ali’i Drive is amazing. Crowds line the streets 10 deep cheering for athletes they have never seen before, but admire for their sheer determination. So I celebrated with them for the achievement of qualifying for this race and knowing that I will again be back here. Fit and fast. To anyone who has the dream to race in Kona. Keep working towards that dream. Because if you want it enough and you are prepared to work for it, then you will do it. And when you do, the feeling is amazing.”

“I’ve said it before and I’ll say it again…that was the toughest thing that I’ve ever done. I knew that racing at the Ironman World Championships was not going to be easy and hindsight is a wonderful thing. I didn’t have my dream race, but sometimes the conditions on the day just don’t allow for it and I’m still very new to the world of Ironman racing and definitely still have a lot to learn. Knowledge is Power! The experience, however, is one that I will cherish for a long time and I will certainly be taking a lot away from this race in order to be back stronger and wiser in the future. That’s right, I’m coming back!

For now though, I’m going to enjoy relaxing in the States for another couple of weeks before getting myself ready for Shepparton 70.3 and Busselton IM (where it all began only 10 months ago).

Thanks to everyone for all the support and kind words and especially to all those in Kona. It was certainly a tough day in the office but I wouldn’t trade it for anything. As they say, what doesn’t kill you……”

Click here to view our photo album from Race week.

As with every Ironman, the Post Race Awards Banquet the following night is always a highlight, as athletes congratulate and celebrate with each other – and compare who has the sorest legs! And the Ironman World Championships Awards Banquet delivered. It had everything from traditional Hawaiian culture, dancing and singing, to the age group awards and those of the top 10 pro’s.

The highlight of the night was the acceptance speech by newly crowned Ironman Champion, Aussie Pete Jacobs. There was barely a dry eye among the 3000+ at the Awards Banquet as Pete spoke about his lead up and his race. He spoke about how he pushes himself through training, what he uses to motivate himself and how he appreciated the support of his family and friends, throughout the year and leading into the race.
He warned us at the start of his speech that he cried at his wedding (but his wife didn’t!) but little did we know he would have us all emotional as he struggled through his own tears to thank his wife for her ongoing support and finished with saluting his parents,  ‘Mum and Dad, this is your son up here winning‘. A proud moment for his parents and all Aussies. Well done Pete!

If you have a spare 10min click here to watch Pete Jacobs emotional speech from the 2012 Ironman World Championships.

So well done to our Ironman World Championship athletes. Tri Alliance looks forward to heading to the Big Island again next year with an even bigger Ironman team.