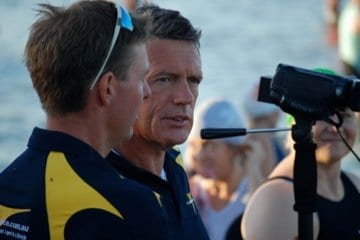 Tri Alliance Triathlon Coaching Melbourne recently announced the introduction of a new Ambassador Program which aims at providing support to a male and female individual in the squad who shows dedication, enthusiasm, lead by example, support for fellow athletes, and openly support the TA Way. The Ambassador Program is proudly supported by new Tri Alliance Partners Mizuno Running and Rocket Science Sports.

At the Launch of the Tri Alliance Summer Training Program last Night at Elwood Lifesaving Club, Coach Greg Nugent made the announcement to the large group of athletes and partners Mizuno and Rocket Science. With a large number of quality entries, it was a hard decision for our Coaches to choose just one male and one female, but in the end we welcomed Lisa MacFarlane and Andy Wood-Rich as our Inaugural Ambassadors for the 2012/2013 Triathlon Season.

Female Ambassador Lisa MacFarlane said of her announcement
“Very proud to be chosen and very excited about the role. Thanks Tri Alliance for the opportunity, thanks Mizuno and Rocket Science Sports for the kit. It’s going to be a great triathlon season!”

2012/13 season! I have had quite a run of luck of late, well tonight just capped it all off. Previously it’s been pure dumb luck, tonight’s prize means so much more. I look forward to using this opportunity to give back to the team that’s helped me so much over these past few years and have gotten me to where I am now.”

Head Coach Ollie Allan congratulated the newly announced Ambassadors “A huge congratulations to our inaugural Ambassadors Lisa MacFarlane and Andy Wood-Rich.  This wonderful initiative was developed by Tri Alliance Staff and elected by our Coaches and it highlights and supports fantastic individuals within our squad that express commitment and dedication to their own training while embracing the Tri Alliance Way. Congratulations Andy and Lisa!”

A big congratulations also goes to our male and female nominees:

The Tri Alliance Coaching Team and Athletes now look forward to the start of the Triathlon Season, including kicking off in Noosa in two weeks time at the Noosa Multi-Sports Festival with around 160 Tri Alliance Athletes competing from Tri Alliance Victoria and Tri Alliance Queensland.

If you would like more information about how Tri Alliance can help you achieve your triathlon and lifestyle goals, contact our Coaching Team [email protected]