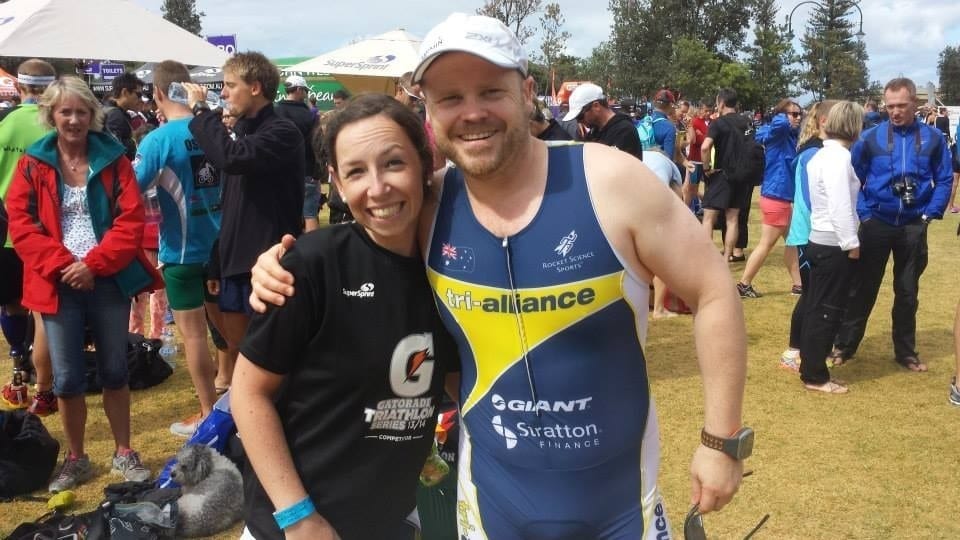 I really admire all the first timers who went ahead and raced in conditions that must have been very scary for them. I hope they take away a great sense of achievement from it and realise that if they can tackle those conditions, they can get through any race!

The weeks since my last update have been pretty hard as I’ve tried to get my fitness back after my month off in Ireland. There were even a few tears in the pool one Monday when I had to drop a lane. So I was pretty apprehensive but also keen to get through this race and see where I’m really at. So here’s how it went….

My pre race prep was less than ideal as ‘The Boss’ was in town and I had tickets to see him at Aami stadium on Saturday night! My usual pre-race night on the couch was replaced with singing and dancing….and boy can that man perform for a long time!!! So bed by midnight – luckily I actually had a pretty good nights sleep.

I knew the weather forecast, so was prepared for a difficult day. As I hit beach road on my way to the race start and saw the water, I realised how difficult it was going to be. There was wind and rain aplenty and the water was angry.

An unforeseen problem left me in a bit of a panic as I set up my transition.There was lots of loose grass around and as my wheels were wet they picked it all up and the back wheel became wedged in the frame. Luckily my good friend & TA athlete Sinead was setting up beside me and came to my rescue. We popped off my wheel, picked all the grass out and with some serious difficulty and help from a Supersprint official, got it back on eventually. I was flustered – so not a good start to the day!

I went to the swim start with time to spare and watched the open male and females start. I noticed they all stayed to the left as they were being pulled right by the current and I formulated a similar plan! Although the swim is normally my best leg, I’ve never been able to match my pool performance in the open water. And when the water is as choppy as it was on race day, its even worse! When the gun went I was standing at the front as I always do but was soon run down as I tried to porpoise but ended up face planting most of the waves!! As I got past the whitewater I thought the water would be calmer…it wasnt! The swell was huge. I kept going without too much difficulty or panic but knew it wasn’t going to be a good time. All my concentration on technique goes out the window when I’m in conditions like that, I just wanted to survive. Which I did, thankfully! As I made my way to transition I thought it had gone ok.

I normally look forward to the bike as I relax into it but it was a tough day out there. The wind was really blowing and was coming from the side at times so I was blown around a bit. Heading towards Kerferd Road  there was a nice tailwind but the other direction was hard work! On the second lap I went harder and took a bigger advantage of the tailwind but I don’t think it compensated for the speed I lost into the wind. I passed a few girls and got passed by only a couple so although my pace was slower, I figured everybody elses would be too!

I dread the run in every race and as I ran through transition my legs got that familiar heavy feeling and I was scared about how much it was going to hurt, especially as I have been struggling with my run since I got back. But as I ran across the timing mat I began to feel good. I knew I had a tail wind to start, so decided to go flat out to the turnaround point. I had shaken off the bike legs straight away and felt really strong. I don’t know where it came from – but didn’t question it either. 🙂 I decided not to look at my garmin as it tends to mess with my head on the run and I just ran to feel. I had a slight distraction as I could feel something in my shoe and having recently had an incident while camping I was convinced it was a spider!! But I couldnt stop, so I pushed it against the side of my shoe…to finish him off…you just can’t prepare for everything can you!! ( Footnote: It wasn’t a spider, it was grass…ahem,moving on….)

The turnaround point came along in no time. I turned and thought ‘yep there it is, ‘whooosh wind in the face’. My pace did drop but my effort didn’t and I continued on as best I could. I knew if I could keep the effort up that I could post a PB. The section from the bridges along Elwood beach was particularly tough with gusts coming from the beach. I kept thinking how happy I would be if I got a PB and tried to get to the finish line as fast as possible. As I turned into the finishing chute I still felt strong and got to my favourite part of every race, the sprint finish!! I crossed the line, looked at my watch for the first time and realised I’d knocked 35 seconds off my run PB. But the best part was that I felt so strong and that I probably could have kept going (especially important as I’m training for Olympic distance).

Getting through the race on a day like Sunday is always an achievement in itself and I really admire all the first timers who went ahead and raced in conditions that must have been very scary for them. I hope they take away a great sense of achievement from it and realise that if they can tackle those conditions, they can get through any race!

Overall, I was very disappointed in my swim, its become apparent how weak I am in choppy conditions and it was my worst ranking for the day, normally my best! I think I probably could have pushed more on the bike but it wasn’t disastrous. The highlight was definitely my run because I’ve struggled so much with it. The fact that I’ve improved that leg has given me confidence for the final 2 races of my season. I know I can do better in the bike and swim so I’m not too worried, especially as my last 2 races are in a lake and st kilda marina respectively. I’m excited again and looking forward to the next 3 weeks which I plan to make count!

As always there was great support on course and it makes such a difference! I’m still 4 spots outside the top 20 but there is not a lot of time between those spots, I’m determined to get there!

Until next time, over and out – from a much more positive, fitter, lighter and slightly more tanned ambassador 🙂