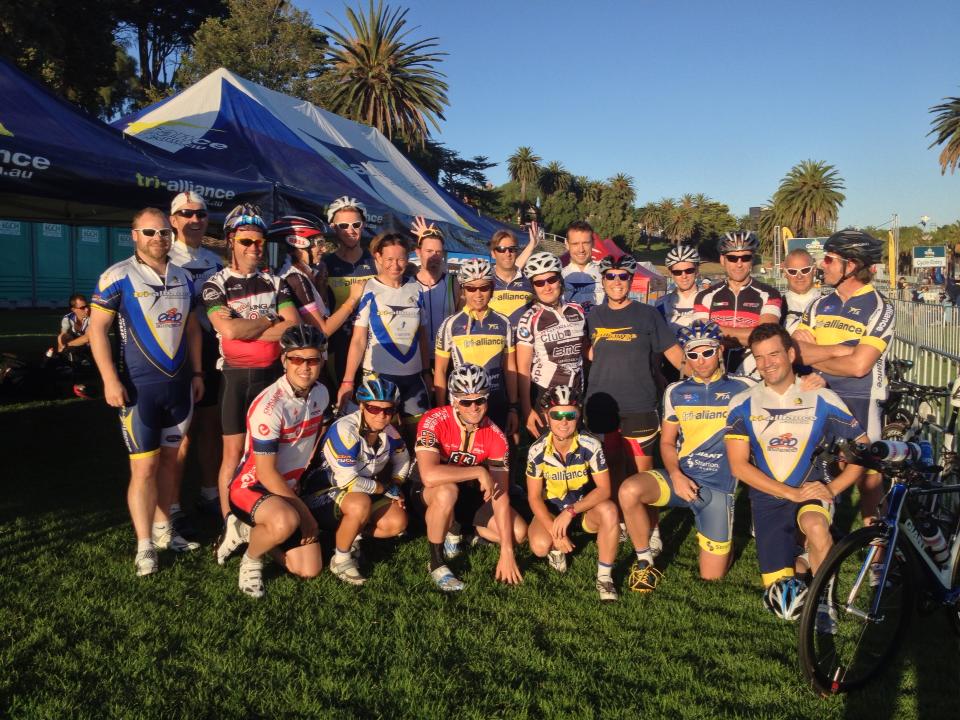 The popular Geelong Multi-sports Festival was out to impress and so were our athletes out on course. With our new Tri Alliance race gear now in full circulation, it was a pleasure cheering from the sidelines and watching athletes in full TA Gear. Plus it makes it so much easier to spot out – nothing worse as a ‘cheerleader’ when the athlete themselves have to shout out to you as they ride/run past. Just ask Jussie! 🙂

Saturday morning we had a great crew already in Geelong for a course familiarisation and pre race session. Was a little eye opener for some as they were surprised on how technical and even a little tough the course was going to be. But none the less everyone was feeling great and ready to race on Sunday.

Three athletes were preparing for the race in a different way on Saturday though as Nick Sissons, Lidia Ursini and Ellie Stubbs had the roles as Lead Cyclists for the races on Sunday. Some last minute changes were made though when they discovered their ‘lead bikes’ were to be the Melbourne Bike Share Bikes. They discovered it was going to be tough going hauling a 15-20kg bike up the hills of the run course – and ensuring the lead runners don’t pass you. So sticking with the theme ‘never try something new on race day’ they converted to an old trusty bike to see them through. Well done guys, from all reports you did an awesome job and enjoyed the chance to partake in the event in a different way.

Saturday night we had a large group dinner with 40odd athletes enjoying a feed with great company. Most interesting food of choice was a chicken curry – not what the Coach recommends before a race! 🙂

Sunday – early as usual to get up and prepare for the race ahead. Some athletes were caught out though as a last minute change to wave start times. But luckily we didn’t hear of any of our athletes miss their swim start – that or they wern’t game enough to tell us. So a good start to the day!

We had a number of athletes who made the trek down to Geelong specifically to cheer on their fellow athletes including Tri Alliance Ambassadors Lisa MacFarlane and Andy Wood-Rich, Cath Capan, Brett Archbold and Brianna Laugher to name a few. Thanks guys – your support on the sidelines is always welcomed!

LONG COURSE WRAP UP
First up on course were our Long Course athletes – in for a 1.9km swim, 90km ride and finishing with a 21.1km half marathon. Of our 33 athletes who raced the distance 23 of them used it for a prep for Melbourne, Port MacQuarie or Cairns Ironman. We had some fantastic results across the board from our Half Ironman Athletes and pleasing results for everyone who used the race as an Ironman lead in.

Well done to our first time Half Ironman athletes Pam ‘Tooper’ Tunas and Andrew Livingtone and Martin Sammut who are both also leading into their first Ironman in Melbourne. Well done guys – super efforts!

Shout out to our athletes in teams in the Long Course including Emma Donati, Rob Scapin, Tania Darvell and great to see Kristine Banks-Smith in the action too!

Key things learnt from the race:

OLYMPIC DISTANCE WRAP UP
Next were our Olympic Distance athletes – with athletes racing at the top end and vying for podiums, first time Olympic Distance, those searching for PB’s and others simply out there to enjoy the course and what this sport has to offer. We had 23 athletes cover the distance, with 6 podiums and a further 6 top 10 place getters. Not a bad effort at all!

Performances of the day:

Read what our athletes had to say about their races: