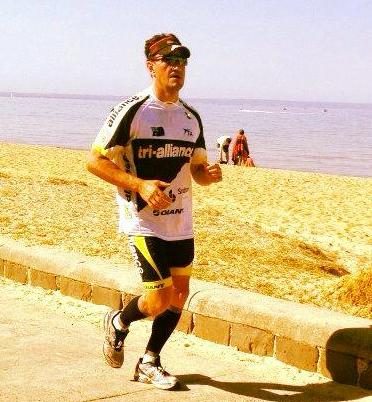 The Half Ironman World Championships are being held again in Las Vegas, on 8 September 2013. A challenging hilly course in the hot desert heat makes for a tough race for some of the best Half Ironman Distance athletes in the World!

Where did you qualify for this race?
Geelong earlier this year

How do you feel and how has your training been leading into the race?
Not too bad, too be honest I really haven’t trained as hard as I probably should but I’ve purposely been backing my training off a bit this year to make sure I don’t burn myself out as its a big year of racing for me. I’m book ending it with two Melbourne Ironman’s, Hawaii Ironman 70.3, Vegas World Champs, Noosa Olympic and Challenge Melbourne is keeping me busy. I remember when I did my first Half Ironman back in 2011 in Hawaii I trained so hard by the time I got to the race I was feeling really burned out and exhausted and that was only one race. So I’ve learned from that and this year purposely set my main training focus to be for the full Ironman races, everything else in between I’m simply out to have fun.

How much extra planning have you had to put into your preparation given you are racing overseas?
Inviting everyone to my 40th Bday on Facebook has been the main one  Why not have your 40th in Vegas!! 🙂

The majority of the squad is in a different training phase, how have you coped with this and what have you done to compensate?
To be honest, I’ve just gone out and enjoyed training for training’s sake. I’m happy to go out on my own now and simply enjoy a swim, ride and run for what it is. If I sleep in on the weekend, so be it, so long as I actually get the training done I’m happy :0)

How has your motivation been training over winter and what’s motivated you?
Main motivation for me to train is simply I have a race coming up. I wish I had known this earlier in life I would have entered more races. I don’t know how many gym memberships I wasted because I didn’t couple it with some sort of race  or competition at the end of it. Trick to training through winter is signing up for an event in winter. Pick your events though, personally I’d go for something small so that if it is pouring rain outside you can skip training or go to the gym instead. Set one too big like an Ironman or 70.3 and their will be times you simply have to go no matter what the weather, and if its too bad, it’s too bad. So pick your races and keep your big ones for summer preferably near the end of it.

Very important, as a naturally lazy person I appreciate being able to simply rock up to training and know there is a well prepared training session for me, so I don’t have to think but just follow along. Particularly when I first started training with Tri Alliance and didn’t know what to do. Not that I know what to do now, I don’t, but because I’ve turned up for a few years and simply followed a program put together by Coaches that do – the result on my body is better than anything I could do trying to work it out. Added to that being surrounded by other athletes has improved my quality of life as well. It has also provided with me personally a wealth of good vibes and energy to draw on when I need it, and to give back to when I can.

A couple of questions around the race,
What has been your biggest challenge leading up to the race?
Making it to the pool in winter, I’d like to say its just the cold weather, which it is a lot, but sometimes it’s not, it’s partly that and partly an anxiety fear of water thing, it’s weird, I wish it would go away but it doesn’t. If I’m feeling good I only get the anxiety in the open water swims, but as anxiety levels rise it stuffs up my pool swims as well. Probably a good indicator for others to see how I’m going, if I smell like I haven’t had a shower in a few days take me to see a doctor will ya! 😉

What do you think your biggest challenge will be during the race?
The heat and hills, it’s currently 40 degrees and the course profile is really hilly.

Of course, making the team is one thing; you have to qualify, what advise do you have for those attempting to qualify for the Half Ironman World Championships next year?

Turn up to roll downs an hang around. My entry was pure luck, I wasn’t even going to complete the race in Geelong but my cousin passed away the night before and so I dedicated the race to him and simply eased right back during the run. I finished 132 in my age group, I hung around and waited at the roll down. As it was a race late in the year, everyone that usually gets a slot already had one from other races, then by the time they did the roll down most people had gone home from the race. They had 30 slots available for the whole race but only 24 people put their hand up, they then said it there was anyone else that had completed the race, could pay and wanted to go to put their hand up, 3 more went up. It was surreal!

You are in the Sin City – Gambling Capital of the world, Vegas! So how will you celebrate post-race??!
Me personally, just relax, but ‘Drunk Dave’ is going to steal Mike Tyson’s tiger, get married to my Cervelo, throw a mattress off Caesars Palace, and drink Crowie under the table if he’d ever RSVP to my 40th! In all serious though, I’ll be enjoying my 40th in Vegas and can’t wait! 🙂 🙂

What are your race plans post World Championships?
Boat Race with those big plastic Eiffel Tower drinking yard glasses against Crowie if he shows up…..Otherwise I guess I’ll just have to settle for a game of beer pong against a Mexican handing out flick cards to the strippers dressed as Elvis. 😉

Final words…….
The harder a person trains to get to the edge of exhaustion, the harder it is for them to find it, and that’s not a bad thing! 🙂

Thanks Dave for spending time with us and sharing your pre race training experience – we all look forward to hearing the stories post race. Let’s hope you arrive home safe!