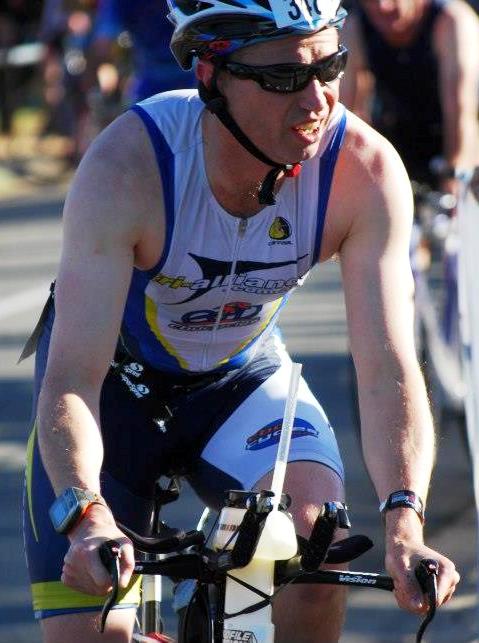 The Olympic Distance Age Group World Championships are being held on Sunday 15 September 2013, with the best Olympic Distance Age Group Athletes from Australia and around the world competing against each other. Athletes race around the country to earn points to qualify in their age groups, and athlete Paddy Fitzgerald will be toeing the line this weekend in his ‘second home’, London. Coach Zoolander sat down with him recently to chat about his lead-in to this race.

It is an exciting time, heading off to the World Championships, the Olympic Distance and Sprint distances have a uniqueness about them. You are an official member of an Australian Team that is competing internationally, how do you feel about the lead up?

The excitement is starting to build. Once the uniform arrived it all got real.

How has your training been leading into your race?

I have taken a relaxed approach to attending training sessions, but trained with a focused purpose at every sessions I’ve done, so the quality has been there – maybe just not the quantity!

The training is slightly out of sync with the core squad (due to the timing of the Worlds in September). I am also training for my first Ironman Melbourne (in March 2014) which is more intimidating for me, so balancing Long course training with the speed required for sprint means I need to understand what the point of the session is and how I get what I want out of it.

How much extra planning have you had to put into your preparation given you are racing overseas?

Not much really. It is in London, a place where I lived for 6 years, and know well. I would have done more if it was an unknown place that had a language barrier. In the UK I just need to put up with the ribbing about the Ashes! However I have been told to keep running whilst on holidays after the event so I do not lose too much Long Course fitness.

What have you found has been the most valuable lesson from the training regime and the decision to race at this level?

For me, this event is about gaining experience at the Worlds, and supporting Lisa (my wife) and the other Tri Alliance athletes. It is difficult to balance speed for the Sprint distance while ensuring a solid base build for my first Ironman. I feel that the Ironman distance is going to challenge me more, as I know I can do the sprint distance, and after all, in my mind, the World Champs are just another Sprint race, just with more kudos. I do not mean to be blasé about this but I have bigger fish to fry this season.

It’s easy to get caught up in the hype of what everyone else is doing, sometimes you can even feel left out, as the majority of the squad is in a different training phase, how have you coped with this and what have you done to compensate?

I have done the long rides and runs with the Ironman group, so have not really noticed “Being Left out”. I have noticed, now that I am doing more speed work, I am less likely to give encouragement out and talk during training. Bit more internally focussed on what I need to do.

The Coaches’ knowledge about balancing Distance versus Speed, and getting that right has been  VERY important. Knowing I had two very divergent races, one requiring speed and the other distances I have never done, meant I had a Coaches consult before starting the winter build  to gain an understanding on how I should approach the winter training.

The Tri Alliance athletes are what makes this club special, and their support and enthusiasm continually pushes me to be better, and gets me to training.

A couple of questions around the race,

Why have you chosen to race Sprint Distance at this level?

To represent Australia in sport has been a life goal, but at 40 I thought that moment had gone. So when Lisa set qualifying for the Sprint World Champs as her major goal last season, my thought was to do some of the races whilst travelling with her, and if I got in, I got in. If I didn’t, it didn’t matter and at the qualifying races I was there to support Lisa when she needed it.

I have had a 3 year goal of being ready to do Ironman Melbourne 2014. When I started triathlons in 2009 I could not swim much and I had not been on a bike for 20 years (and that was just riding around vineyards, never any distance!) I still consider IM Melbourne to be my A+ race, the World Age Group Champs are my A- race, but it is more important to be support for Lisa and the others who are racing.

Some time in the future I will set the Worlds as a goal and take a more serious approach to them, what distance I don’t know, when – I don’t know….

What do you think your biggest challenge will be during the race?

I plan to enjoy the race (but still go hard), I do not want to finish last, as I have been focusing on Long course for 3 years I do not have the speed I would like for Sprints (much prefer 70% effort for 5 hours as opposed to 110% for an hour 15!)

Of course, making the team is one thing; you have to qualify, what advise do you have for those attempting to qualify in Edmonton, Canada 2014?

My advice is if it is an A goal,  plan strategically. Look at the qualifying races and times, and see how they compare to your current time. Remember it is about points over the season (with a maximum of 3 races) so choose wisely.

For those who think it sounds like a good idea but have doubt in their ability, put your name up there (you have to register your interest for qualifying on the Triathlon Australia website) – it costs nothing. See what happens. It’s only once you are offered a spot do you have to make a decision on how important wearing the green and gold is to you.

What are your plans post Age Group World Championships?

Off to Turkey for a week, as a reward (Always reward yourself for achieving your goals). Then back into IM training, March is not that far away!

Sometimes dreams are about taking opportunities when they come along, even when you are not focusing on them.

Get yourself into a position to say “No”, and then make a decision.

Thanks Paddy for taking the time to sit down with us before jetting off to London and sharing your experience. Have a great race, have fun and cheer hard for the rest of the team for us!!