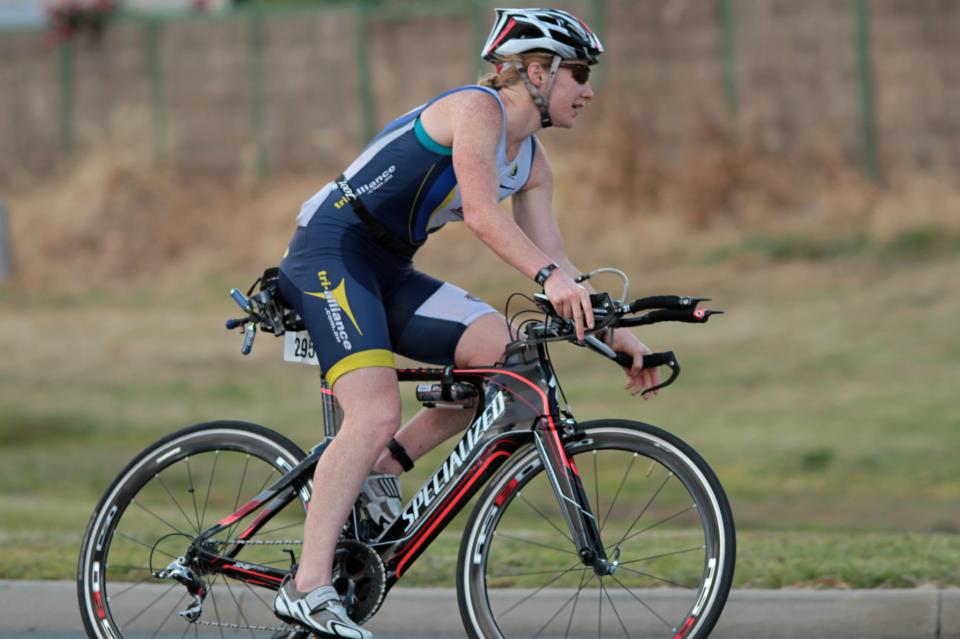 The Olympic Distance Age Group World Championships are being held on Sunday 15 September 2013, with the best Olympic Distance Age Group Athletes from Australia and around the world competing against each other. Athletes race around the country to earn points to qualify in their age groups, and athlete Lisa Dominguez will be toeing the start line in the highly competitive female 30-34 year age group. We sat down with Lisa recently to chat about her lead up.

It is an exciting time, heading off to the World Championships, the Sprint and Olympic distances have a uniqueness about them. You are an official member of an Australian Team that is competing internationally, how do you feel about the lead up?

I’m excited, curious and a little bit nervous! I’ve really enjoyed the atmosphere of the bigger qualifying races I’ve done where there are ITU World Series races as part of the weekend, so I imagine that the 5 day festival of events over in London will have an awesome atmosphere. Racing as part of a team is a new experience for me, so I’m really looking forward to meeting new people and experiencing the Opening Ceremony and official team function as well.

How has your training been so far?

Pretty consistent, I’ve been lucky to have a pretty much uninterrupted lead in to the race. I’ve been able to fit training in around other commitments quite nicely for the most part.  I had most of April off proper training after racing 4 qualifiers over 6 weeks in the back end of last season, then started base training again in May. I’ve had a couple of good training spikes, doing a couple of winter training camps, and began speed sessions around 7 weeks out from the race. I’d love a bit more time before the race to build my speed back to where it was over summer, but I guess this is the inherent difficulty with racing out of season to the country in which you live!

How much extra planning have you had to put into your preparation given you are racing overseas?

Apart from financial considerations, I haven’t found the preparation too different to racing interstate. The trip is longer obviously, so I had to consider pre race training facilities and opportunities, and make sure I’m staying somewhere with access to training facilities. I’ve learnt it’s not easy to find a place for a good bike hit out in Central London! I’m glad that I’ve had the experience of racing interstate several times, I’ve got a bit of a routine worked out that will hopefully get me through without too many complications! England is quite an easy destination for travel- there’s no language barrier and things like food/bike supplies and any other essentials will be quite easy to come by, and similar to what I use here.

What have you found has been the most valuable lesson from the training regime and the decision to race at this level?

To understand my program and remain confident that the training I’m doing is right for the race. It’s felt like such a short time to prepare that I want to know how the session is going to benefit my racing- I find this is also helps to stay focussed in the tougher sessions.

It’s easy to get caught up in the hype of what everyone else is doing, sometimes you can even feel left out, as the majority of the squad is in a different training phase, how have you coped with this and what have you done to compensate?

I’ve just tried to keep my goal in the forefront of my mind, which is admittedly easier said than done sometimes. I’ve always enjoyed a mixture of group sessions and training on my own, so it hasn’t been too much of an issue to be out of synch with most people. The coaches have been awesome with answering questions and making sure my sessions are structured so that I’m getting the maximum benefit out of them in time for the race.

How has your motivation been training over winter and what’s motivated you?

My day to day motivation for training has definitely fluctuated at times over the last few months- but it’s not really in my nature to commit to things halfheartedly. If I’m going to bother flying to the other side of the world to race for a few hours then I’m going to make sure that I’ve done everything I can to get the best possible result! In a way, having the early race to focus on (and the accompanying fear factor!) has probably made it easier to train through this winter than it was last year.

It’s reassuring to know that there is such a wealth of knowledge and experience among the Tri Alliance coaches available to me as required, whether it’s seeking help for specific things or just to confirm that everything is on the right track. As for the other athletes, I couldn’t ask for a more supportive group of people. Ever since I joined Tri Alliance there has been amazing support at races, and in training it’s nice to know that while people may be doing different things within the session, you’re all out there at the same time and there will probably be someone to chat to once it’s finished!

A special mention must go to the Northside crew for what I think is my third winter of braving the temperamental showers of Northcote Pool, and the Yarra and the Maribyrnong twice a week, beanies and hot beverages in hand!

A couple of questions around the race,

Why have you chosen to race Olympic/Sprint Distance at this level?

After racing my first 70.3 in November, I was struggling to decide which path to pursue- short or long course. After receiving some quality advice from the Zoolander himself, I decided that it was best to focus on short course for now, increase my training age and foundation, then see where things are at over the next couple of years. There is the added bonus of shorter training sessions- no more 5 hour rides required- so a little easier to fit in around work and other commitments.

What has been your biggest challenge leading up to the race?

Trying to maintain my ideal quality of sessions and recovery whilst working extra shifts to fund not only the trip to London (and essential post race holiday), but also the qualifying races and seemingly endless number of other miscellaneous expenses that I’m sure everyone reading this is familiar with.

Also, I think it will be tricky to make sure that I don’t exhaust myself in the time in London before the race. The age group OD race is on the last day of a 5 day event, plus there will be the temptation of checking out all the sights, shops and markets of London as well, so I will need to make sure I don’t get too excited too early, and run out of steam by the time it’s my turn to race!

What do you think your biggest challenge will be during the race?

To stay focused and race my own race, remembering that I don’t feel as race ready now as I did over the summer. It sounds like transition distances are likely to be very long and possibly crowded, so keeping alert, safe and hopefully gaining some time in these areas will probably contribute to a good overall result.

Of course, making the team is one thing; you have to qualify, what advise do you have for those attempting to qualify in Edmonton, Canada 2014?

Look at the National Series race calendar- NOW- and plan your peaks for the season accordingly. Remember times for the qualifying races don’t actually matter, you just have to be in the top 20 for points to make the team. Talk to someone that knows what they’re doing if you’re not sure.

Your race season does not have to match anyone elses’- from my experience so far I’d say the earlier you finish racing for the year the better, gives you more time to have a good recovery and then build into Edmonton. This will of course offset your routine even more from the majority of the squad…possibly something to think about

Estimate how much you think it should cost, then double it, and you’re probably in the ballpark! And no, there probably isn’t a cheaper way to do it…

If there’s not a huge group going, you probably will be training by yourself a lot, and it will be dark, and sometimes raining too! Make sure you’re ok with this.

Spend some time considering it carefully before you decide to go, it’s been rewarding so far but has definitely been a big commitment!

Will you be racing in an aero helmet? If not, why not? 😉

What are your plans post Age Group World Championships?

Initially, enjoy the parts of London that have been off limits since arriving eg: Bars and Marks and Spencer baked goods! Also spend a few nights soaking up the sun and not wearing any kind of lycra in Portugal.

Then once back in Melbourne, I’m going to race Yarrawonga in October simply to try and get some points on the board in case I want to head to Edmonton next year. I’m not 100% on this one yet but want to keep my options open. Beyond that, I’m not really sure, will see how I feel when I get back from London.

Final words…….
I think that’s enough for now- see you all in October 🙂

Thanks Lisa for sharing your experience leading into this exciting event. We all look forward to tuning into the race in a couple of weeks time and cheering you on from afar.