This is about my experiences at Noosa and Port Mac half ironman in NSW. But I can’t let the events of last weekend go by without one final mention: thankfully our little tough-as-teak Yas G is still with us after that crash. Coach Suz saved the day and we all go forward to Busso in a month thankfully in one piece. The lesson to us all on the ride is to expect the unexpected at any given moment.

Well I only got half my money’s worth on the swim. But I’m not complaining. In 2010 I think I stopped on every bank for a breather and chatted to every life guard as I meandered around the canals in 65 minutes. I got that down to 35 minutes last Sunday.

Having missed the full event last year, I was looking forward to Noosa 2012. Coach Mark had suggested the swim and ride only this year, coming just a week after the half ironman and with Busso so close. More on that later.

After taking an eternity in transition at Port Mac I thought I would at least practice both T1 and T2 at Noosa and put my sleek new purple/green Mizuno Ronins at the ready, with the possibility of easing through the run. 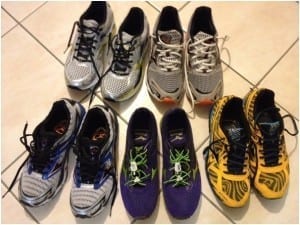 There was drama before the swim even started with organisers mixing up the cap colours in my age group. Didn’t need that stress before getting in the water. It was all sorted out and meant several groups going with the same fluoro green.

The swim went surprisingly well. Coming off a 37 minute effort over 1.9km the Sunday before, in wetsuit on that occasion, I was confident. I took my self-seeded spot at the back and just swam; no stopping this time and actually enjoyed it.

There was one moment of swim rage as some guy wanted to fight. He lashed out with his arms and legs at me because I invaded his personal space apparently. I let him go laughing because I had not realised the farm was up for grabs.

There are usually few advantages with a late start; we definitely had to fight a current on the home leg, and the heat on the run. But setting off at 8.20am meant most of the heavy rain had cleared and the roads were less slippery.

There was still carnage out on the corners and I saw two cyclists go down. However the ride was enjoyable and fast. Coach Suz had left me trailing on Garmin Hill two years ago and this time I managed to do the same to other competitors.

My time was by no means blistering, 1:13, but about 15 minutes quicker than 2010 and peaked my interest about the run. I rode with the coach’s last-minute chat ringing in my ears: I always put it back on the athlete … do what you think is best … but be prepared for the consequences. Thanks Mr Turner.

I felt so fresh, so good after the swim and ride that I decided to put the Mizunos on and head out of T2. In the back of my mind was Noosa two years ago and at least making amends for that disappointing effort. I was quickly busted.

So I sat on a comfortable pace throughout. I did not think I was emptying the tank at any stage and just relaxed. I probably felt better on that run than any competitive race in my life. I was genuinely surprised to see the kilometre splits.

I brought it home in 39 minutes for a 2:29.02. That was a huge Olympic distance pb … plus a massive 50 minutes better than my previous Noosa best. And mind and body felt fantastic. Looked sharp in the new Rocket Science elite tri suit too.

Yes, I copped a deserved talking to from the coach and felt a bit like a naughty schoolboy. But he also passed on congratulations for the effort and urged recovery and refocus on the ironman in five weeks.

The support from fellow Tri Alliance teammates from Queensland and Victoria was amazing out there. We are certainly a force to be reckoned with. Our tent definitely is … jealous rivals describing it as the Cirque du Soleil. Well I can tell them there was plenty of entertainment inside before, during and after the big race.

And that carried on through to the after party.

Road trip. A seven hour drive to the northern NSW coast for one of the best events on the triathlon calendar. A 70.3 at picturesque Port Mac.
This was to be my second half ironman, but without doubt I was going in better prepared than previously. And it proved to be the perfect day with a dozen or so Tri Alliance Qld long course colleagues smashing pbs.
I was on unfamiliar territory and a master stroke happened to be a drive over the bike course with Port Mac veteran Krista Page and daughter Eve at the wheel. It was certainly more challenging than expected.
Another key to race day success was an evening meal with Jarrod Williams and his dad. Jarrod has been under the watchful eye of our friends at Apples to Zucchini and his nutrition plan has paid off with some incredible results, including a one hour improvement from the Cairns half to Port Mac.
There were fast times aplenty, including Callan Lloyd, David Doyle, Tim Franklin, Alicia Newman, Paul Williams, Krista, Paul Moore, Kerry Ireland, Phillippa Smith and Shelley Marriott.
Kitted out in the Rocket Science elite wetsuit, the swim was my best ever. There were wave starts, which differs from normal Ironman events, which meant open water. It was so clear, with fish spotted below, and fast up to the turn. But a strong current coming back made it slower going.
But I was thrilled with 37 minutes, a seven minute improvement on Cairns. I’m told #1 fan and coach Suz were so amazed they questioned whether I had gone round an early buoy. Nooo!
A short hop to transition and out on the bike. It is certainly a tough ride out of town with plenty of hills before the open and exposed flat roads to the turnaround at Lake Cathie …25km/hr one way 45km/hr the other.

And then there is Flinders Hill. A notorious ride landmark which, must be climbed twice. The organisers put out carpet on the hill this time to let stalled cyclists walk up. And many did. There were cow bells and cheers from locals as we battled up the steep incline … not unlike Cemetery Hill on the Brisbane river loop but longer.
Repeat racer

s were happy the half marathon had been changed from the ride course to the flat going in the opposite direction around the point. But it was narrow paths for the first couple of kms.
Having blown up at Cairns going out at 4:15 pace I was wary … but I slipped into a groove at about that speed and hardly missed a beat. My splits stayed between 4:05 and 4:20 all the way and I came in with a 1:30 and a 5hr 9min time overall.

The light and speedy Mizuno Elixirs were the best shoes I had ever raced in and I was now contemplating whether they would be perfect for marathon distance.

Of course Mr IT (not) had no idea on the times. My Garmin 910 had packed it in and so had my bike computer earlier. I had a million Facebook messages on my phone waiting for me revealing swim, ride and run splits. Very excited #1 fan.

But … the best part, apart from a really cool medal and finishers tee shirt was the amazing ice cream and fruit salad in the recovery tent. It was so welcome after a hard effort on the renowned course.
That was a 15-minute improvement on Cairns and gave me real hope for Busso.

The funniest moment of the weekend came on the midnight drive back to Brisbane. There was no  petrol station open in Port Mac so I red-lined it in a state of panic, phoning #1 fan at 12.35am to guide me to the nearest fuel stop on the Pacific Highway at Kempsey. Her calls to various stations revealed that they not only sell petrol but they sell it to Queenslanders as well….Now that was a close call indeed.