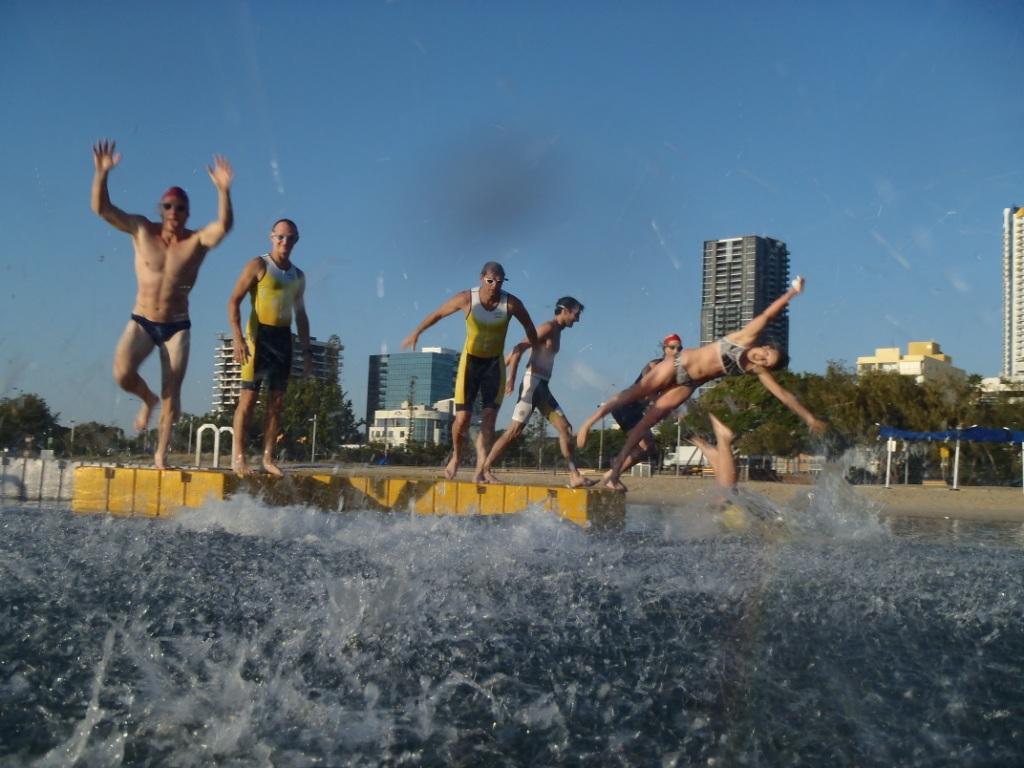 Well it is hard to believe it is a week since that day. My body still feels like it has been hit by a truck, although I have managed a gentle river loop ride and 45-minute run at the weekend.

The run brought back memories of the marathon at Busso Ironman. It was without doubt the toughest five hours I have done. I am still staggered by how things went so off course and my race plan turned to survival mode just to finish.

But that is getting ahead of myself.

Busso, now officially a city, is this beautiful spot on the southern WA coast.

I arrived five days before race day and, perhaps unwisely, drove straight to the 2km jetty that we would have to swim around.

“The Busso jetty goes forever … holy crap,” was my text/photo message to coach Mark Turner, while #1 fan told me to get back in the car, stop looking and drive away.

It was initially cold, wet and windy. The seas were rough and our first prep swim reminded me of Noosa ironman camp a few months earlier.

But 24 hours later and a world of difference, the huge surf had disappeared and the water was calm and crystal clear. That had to be a good omen.

Our ride on part of the course revealed it was flat as a pancake and fast in parts, although a little exposed to the wind in others. The beachside run course was equally flat and open if the weather turned.

A final mini tri the morning before meant all things were in place.

Our Tri Alliance BBQ, complete with Tim Franklin’s words of wisdom, and the official ironman welcome dinner confirmed we were here for some serious business: a 3.8km swim, 180km ride and 42.2km run … one after the other.

I heard the trees blowing in the wind about 2am, an hour before getting up, so knew the calm water was gone again. Daylight revealed it was not quite as choppy as earlier in the week but far from flat.

That began a very nervous few hours before the gun went off at 5:45am.

A final check of the bike, tyres pumped, exchanging a few pleasantries with fellow competitors, then the wait. I can’t remember ever being so nervous. Thoughts of locking myself in the nearby toilet block and never coming out crossed my mind but the stench and other blokes threatening to bust the door down persuaded me to face my demons.

I donned wetsuit and got a final good luck kiss from #1, then waded into the water. A hug with housemate Krista Page, pat on the back from Brad Jones, and a “kick arse” from Ando  helped.

Somehow I found myself near the front of the 1700 strong swim pack and quickly reversed that anomaly. I picked a relatively clear spot and, watch started, began this incredible journey.

It was amazing that despite the mass start, the path opened nicely for me up the middle and I was hardly troubled by another swimmer. There was one early moment of panic when I saw a black shape sliding through the water beneath me … I was sure it was one of those 6m WA great white sharks, but on closer inspection it was a diver, there to keep the sharks away with their sonar equipment.

The swim went to perfection. I actually enjoyed being thrown from one wave to the next and just kept swimming. I only stopped to round the jetty, trying to avoid a log jam at the buoy, and then setting off for the shore.

I could have walked away happy then with a 1hr 20min swim. I almost thought my Garmin was playing up again, but the clock confirmed my relatively speedy effort. I took almost that long to do 1.5km at Noosa two years earlier. Wow.

I had my usual picnic in T1 and was soon out on the bike in my TAQ cycling kit, pockets loaded with food.

The wind did change near the end and made it dramatically tougher on two wheels. It was fantastic to pass #1 and other TAQ supporters on the ride and hear their shouts of encouragement.

It did not go so well for Coach T or Suz McCarthy with the puncture gods not smiling kindly. The bike leg can change so quickly and turn a fast ride into something completely different.

It was interesting seeing the leaders fly by several times at 40+ kmph. They do it seemingly so easy in a shade over four and half hours.

I thought I had followed the sponsors SunSmart message but had obviously missed a spot on my forearm and knees with the slip slop slap. They were caning after six hours in the sun.

My nutrition had gone more or less to plan, but I think not eating in the last hour or so on the bike bit me in the bum later in the run.

The heat, locals said it ranged between 31-36, meant it was hard to even think about food and keeping gels and gu down was next to impossible.

I remember getting off the bike after the clocked 182kms and my legs were like jelly. Usually I have no problem with the transition from ride to run, but there we clear signs all was not as it should be.

The run … my zone, my own. I had talked with a housemate the night before about the potential for a 3:20-3:30 marathon. In retrospect that was naive or plain stupid. I don’t think I paid the run leg enough respect and won’t make that mistake again.

A fast marathon on fresh legs maybe. But not after eight hours of gut-busting exercise. I now wonder if I had gone out of T2 with a four-hour run in mind and stuck to that plan b.

I ran past Tri Alliance’s head coach from Melbourne, Ollie Allen early on at 4:45 pace. He said run like that all day and I will be fine. I was for the first 5km, but then the wheels came off.

Coach T ran with me for a km or two and gave me tips about getting nutrition on board and slowing my pace down. Easier said than done.

I must admit 25m run efforts became too much.

The mind plays funny tricks. I could not get past the thought that I still had 30kms to go at one point.  That would be impossible, I reasoned.

But a mixture of tlc and some of the harsh stuff from #1 as she ran/walked nearby kept me focused.  There was no way I was giving up. Never had a DNF, not about to at my ironman debut.

There was lots of support from TAQ colleagues suffering just as much out there in the baking sun, wind and heat. We all wanted to finish. It was a mixture of emotions. I wanted to survive, but the runner in me was so disappointed that I was walking.

Collecting the red, third wrist band was the turning point. One more 10.5km lap to go. I knew I could do that. Pick up black number four and then homeward bound. I managed to run in the last few kms and staggered across the finish line about 7pm.

It was a great feeling to fall into the arms of volunteers and my #1. My time was well over my sub 12 hour goal, but that’s the nature of this beast.

It was a welcome sight seeing everyone else in the recovery area. The volunteers wanted to take me to medical but Yas said ” no, he’s one of us.”  Yes indeed, one of the tough ones they breed from Queensland.

A week later I am proud to be an ironman. I owe big thanks to lots of people, Taryn, Mark, Suz, Tim O, Brad, my Busso housemates  … and the 26 of us who started and all finished.

It was an incredible journey. Part of me wished I had gone faster than my time of 13:27, but I keep being reminded that I achieved the ultimate goal.

I will sit down in days and weeks to come and debrief with the coach and see where it could have gone better. Maybe nutrition, maybe the races in the lead-up, under training, over training, who knows.

There were some amazing performances on the day that I will never forget, Brad, Leigh, Alicia, Claire,  Krista, Tim, Ben, Gleeso. I am proud to be a member of the class of Busso 2012.

My advice to those wondering about an ironman: don’t be in a hurry, prepare thoroughly, get plenty of advice, listen to your coaches, and most of all … enjoy.

Now the big questions: Cairns Ironman (signed up) and do I get that tattoo?