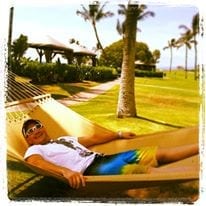 The Hawaii Half Ironman is a magnificent race held on the Hawaiin island Kailua-Kona, on the Kohola Coast. The same island the prestigious Ironman World Championships are held in October each year.
‘The swim takes place at Hapuna Beach State Park, frequently listed as one of the best beaches in the United States with its warm, crystal blue waters, white sand, and occasional sightings of spinner dolphins and resident honu (turtles).

The bike course leads athletes along the infamous Queen Ka’ahumanu and Akoni Pule Highways towards the tiny northern town of Hawi, known for its unique boutiques, restaurants and galleries, and of course as the IRONMAN bike turn-around. Athletes cycle their way through black lava fields and green pastures, ancient, historic Hawaiian heiau (temples), and modern wind farms that hint of the notorious and legendary Kama’kani winds.

The hot and sunny run starts and finishes at the beautiful Fairmont Orchid, Hawai`i , and winds its way through the Mauna Lani Resort over modern golf greens, past ancient petroglyph fields and fishponds, and the historic Ala Loa Foot trail.’
Source: Official Ironman 70.3 Hawaii website

Wow what a race! The race was fully sold out and switched to 3 wave starts of Pro’s, Men and Women separately – normally all would hit the water at the same time. I had recently completed Ironman Melbourne though, so I was prepared for anything in the swim! 🙂

You just feel awesome floating out at Hapuna Beach waiting for the start, surrounded by some amazing athletes in the clearest water you’ll ever swim in. With the sound of the cannon we were away, swimming along the course I could see all the way to the bottom, looking at fish, rocks and coral. Amazing. I’d then look left and right and see all the different colours of various countries and tric clubs of athletes swimming in what looked like perfect form. I felt a sense of honour being amongst it all.

Coming around the last buoy I noticed there was a bit of a rip trying to pull me off course,  but I didn’t mind I was just having so much fun and enjoying just being in the moment of the race.

The crowd cheered as we exited the water and all charged up the beach, a quick transition and out onto the bike course. The first hill from the mount line is so steep they had volunteers to give you a push as you clicked your feet in. I secretly wanted mine to keep pushing me up the hill, but no such luck. 😉

The bike course is over the hardest part of the Hawaii Ironman course.  It winds it’s way along the coast and through the lava fields and heads up to Hawi, where you turn around and race back. My plan was the same as Ironman Melbourne, ride as if you’re not going to run and just see what happens when you get off the bike.

So I pushed hard all the way to Hawi into a 20mile/hr head wind, hoping to get off the bike before the 45mile/hr gusts started up. I remember laughing at the weather guy at the Pre Race Dinner who, in advance, apologised for the wind that was going to out on course. And yep, he was right! The cross winds would push you around particularly as you came through a cutting in the road and smashed you on the side, trying it’s best to derail your race plans. I turned just as the wind did pick up in in Hawi. Headwind there, followed by a headwind back.

None the less, I kept pushing my limits as I flew downhill back towards T2. A slight hiccup in proceedings as I was having trouble getting into top gear (the joys of travelling with your bike!) I had to bend my Tri bars to get the gears to change, thankfully everything stayed together and I stayed upright. So all good! I was flying down the road passing heaps of people when suddenly my tire exploded, dammit. I spoke too soon! I pulled over to the side of the road to start working on my flat.

It was at this point that I didn’t realise how hot I had become until I took my helmet off. I knew I was likely to be there a little while, so thought this was best. But as I did, not only did I find myself dizzy, but also dis-orientated from the heat. Not the ideal situation to be in. Not an ounce of shade on this bike course!
I managed to change the tire soon enough, but spent the next 5kms just trying to cool my body down. It was over-heating and fast. That being said, I was still having fun, even as the 45mile/hr head winds stood me up on my bike. 🙂

After cycling through some more lava fields I finally pulled into the Fairmont Hotel and jumped off my bike. A quick transition, and I was off running onto a mixture of an energy sapping golf course (which was like running on memory foam!) and hot  roads amongst the lava fields. I thought the BBQ rock lava would cook me (which it did) but it was more the humidity that hurt the most. It felt like it was draining the life (well energy at least!) out of me.

At this point in the race, it was all about keeping cool and so I kept throwing ice down my top and water all over me at every aid station, those racing in October should practice running with wet feet as I see no way around it.

I passed and waved to Alison, Katee and Steph as I went around, we were all doing it tough but having so much fun, before I knew it I was running through the finishing chute to finish the race in 6 hours and 10mins which may sound slow but actually put me in the top 3rd of the field of a very tough race with a 1 hour PB from when I did it last!

Soooooo much fun completing one of the most narcissistic masochistic things I’ve ever done :0) I love Hawaii and can’t wait to come back and do it all again. Next time you’ll have to come with me! 🙂