Noosa – from a beginners perspective

Home » Noosa – from a beginners perspective 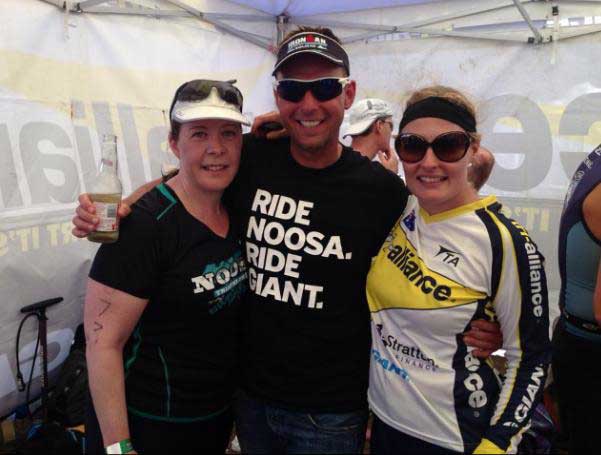 My journey to Noosa 2013 – By Caleche Watson
Just over a year ago, spurred on by jealousy hearing all the amazing stories coming out of my squad (Tri Alliance) , I along with my training friends (fondly known as the Tri-Hards) entered the Noosa Triathlon, an Olympic Distance Triathlon that is so popular it sells out every year in a matter of minutes. Sitting in the Qantas lounge the day the entries opened, I managed to get an entry to the 2013 race before my flight boarded. The fun begins.
The 2012/2013 local season was a disaster for me, not being able to enter one race, due to tearing a disc in my lower back. But I had rested well over the summer, so come end April, training was on! I sat with one of my coaches, Emma, and we put together how I was going to get from 3 sessions per week to 6. I was committed and consistency was the game, the challenge was finding the balance between work commitments and getting to training. I never want to let anyone down work, family or training buddies, so it was tough.

First few months, I was doing well, swim, run, bike – 6 times per week and getting used to those early starts. Then, disaster struck. One Thursday night I did a ‘recovery’ run – it was 9km and the longest run I had done since my fit days in Sydney. My feet couldn’t take it. I did some tendon damage in both feet and found out I also had a broken bone in my ankle. So, running took a turn for the worse. But I kept going with my swim and bike riding, building up to 90km rides on Saturday mornings and adding an extra swim each week to make sure I could do the 1.5km without stopping, although the open water still intimidated me severely.

6 weeks before the race, I negotiated with my podiatrist that I can start running again. So, he put me on a build program and made me promise to run 5 mins and walk 5 mins in the race… 5 weeks before the race, whilst practicing running into the water as you do starting a race, I sprained my ankle. ‘RICE’ I was thinking and doing, but there was no way I was going back and telling my podiatrist I had injured another thing! So I rested as much as I could and only did short runs. I had to adjust my expectations for the run leg of the race, but it’s hard to do.

Heading up to Noosa was exciting. Luckily our (now named) team manager Ian, got us some bike bags and taught us how to dismantle our bikes and pack them up for air travel, plus we got some great advice from the squad. Who knew you had to deflate tyres!
Our location in Noosa was beautiful (also organised by Ian). Meeting the squad up there was great fun. We did some training rides and an open water swim, which was great as Ollie gave us plenty of advice.

The day before I received some great good luck messages from friends all over and mates in the squad, which was just so nice and much appreciated.
Race morning, the conditions were perfect, although we were all warned that the day was going to get hot quickly. We were up at 4.30am and heading down to set up our transition area. The buzz was incredible. The Pro’s started at 6.15am, but my wave didn’t start until 8.02 so I followed Coach Bernadette’s advice and took care of any ‘nervous needs’ before heading to the swim start… plus lathered on an incredible amount of sun screen. FYI – the pro’s were finishing, just as I started!

I had a few TA friends in my wave, so we all did a bit of a warm up and discussed where to position ourselves. Before I knew it, our race had started. It took me about 200m to get into a good swim rhythm and to get rid of my panic. It’s tough having people swim over you, avoiding them kicking you and just trying to breath. I was thinking of all the things Coach Des had told us. I was really happy when I settled into it and I managed to keep going the whole way. I was so pleased to make the last can and reach the swim end. I sprinted out of the water and headed into T1, checking the row number of where my bike was located in transition, which I had written on my hand in texta. I was so pleased when I got there to see some of my friends bikes still there…. I’d beaten someone out of the water! (My lead didn’t last long, but I’m holding onto the fact I did something quicker!!)

Trying not to treat T1 “like a picnic” I was out and onto the bike leg. 40km ahead of me… it’s just down to Mordi and back. Done it heaps of times, so I wasn’t fazed. It wasn’t long before Jo, Mary and Caroline all over took me. I was waving “Hi Mary!” and just enjoying my ride. I kind of forgot I was in a race at some points. Noosa is such a lovely place, my lack of race experience showed with a bit of day dreaming! The one part of the race I loved was the 1km decent…. I was watching my Garmin, I’d never gone faster than 45km/h on my bike and we were told to “ride to our ability”. I started feathering my brakes when I hit 50km/h, the next time I looked at my watch I was up to 58km/h and I thought “stuff this I’ve got to hit 60 now” so I let go of the brakes and flew. It was so much fun. I made it to about 65km/h and feeling confident and stable, I just wanted to turn around and do it again!

Finishing the bike leg, a little over my preferred time (attribute to the day dreaming!) I was into T2, sneakers on and off on the run. I had been following my nutrition plan on the bike and continued to into the run. The first 1km went to plan, 5 mins on and 5 mins off. But then, it hit me… it was so hot and I started struggling. My 5mins on dropped to 3 and I just had to battle on. I was so close (albeit 8km away) to reaching my goal. I took on water and ran under the hoses and sprinklers on the course. The number of TA squad peeps encouraging me on the course was great, I actually didn’t know who the majority of them were, but it didn’t matter, TA support TA whether you’re an advanced athlete or a beginner, it was a great feeling. But, it was hot, I was feeling water logged and then I had a stinging pain on my foot. I had to stop and shake my sneaker. An ant had bitten me! Out of 7000 sneakers in transition, a bloomin ant crawled into mine and bit me! Anyway, with the ant gone, I carried on.

With about 2km to go, I was determined not to stop. I spotted Coach Emma which was a great motivator so close to home, then I reached the TA Taj… ran past and was cheered on by most of the squad… I felt like a super star, everyone was cheering for me. I didn’t care where I was in the placing, I had made it and my team was cheering me on. Around the corner was the blue finishing chute where I crossed the finishing line. What a feeling. I had done it. I had set out to finish in under 4 hours, then thought I could do it in 3h 47m and did it in 3h 45m.

With more race experience and no injuries, I’m sure I can do better than that next year!

So, Olympic Distance is challenging, a lot of training but totally doable, I’ve proven that to myself now. Bring on the next challenge, although I can categorically say “I am NOT ready for an Ironman!”

Here’s what the Noosa experience is like if you haven’t been!