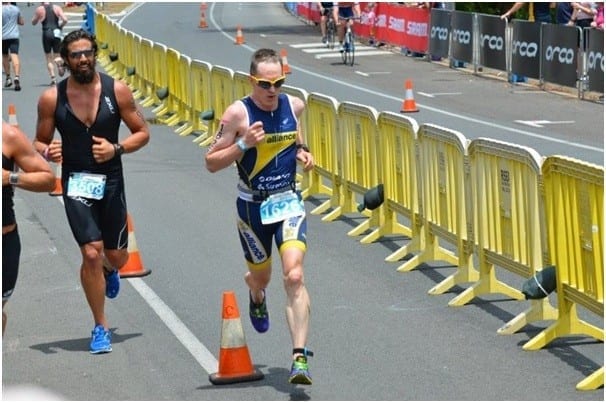 Well that was the hardest tri I have ever done at Raby Bay on Sunday.

I haven’t got any slow time to back that statement up … but it sure was tough … the swim, that ride, particularly the run.  Hard as!

Didn’t even put the Tri Alliance suit on, but definitely struggled throughout.

It was so difficult because I missed it. Not because the field was full, but because I was on enforced rest and recovery.

A combination of fatigue, injured feet and a recent lack of motivation had combined to sideline me. And only a month into the Cairns ironman campaign.

But as coach Mark Turner will tell you: my body was screaming out for a break. However, I had not been listening.

We triathletes are our own worst enemies. We just don’t listen sometimes.

Type A intelligence and enthusiasm and determination. But Type Z common sense.

I like to think of myself as a smart guy. But I am also one of those who train on and on and on. Hoping to run through the pain, thinking it will go away by itself … that I won’t feel so tired tomorrow after a better sleep.

Well it all caught up with me and bit me on the proverbial arse.

2012 saw me compete in 18 major races, including an ironman, two halves, a marathon and countless other events.

Not to mention all the training that went with it.

Coach T kept banging on about the fact that I was not 20 anymore. I felt 32 — smirks aside please — but that seemed to fall on deaf ears.

And Busselton, the final race of the year was the doozy … 13 hours or so took its toll.

He warned me about backing up and attempting another ironman just six months later. I was confident I could and prepared accordingly.

But nothing could have prepared me for post Busso.

I took a week off (almost) and kept to an unstructured program from the coach for the next month. Trained only when and what I felt like. But before long the (self-imposed) double sessions were back on and the body was being hammered again.

By the time it was ready to kick off the Cairns 20-week campaign, I was already feeling a little jaded.

The Turner Tuesday talk about fatigue, not just feeling tired, resonated a little, but I still pushed through. A couple of good hit outs at those morning run squad sessions gave me false hope and security.

He kept threatening an extended break in the program. Maybe a complete week or two off. Heaven forbid.

But the first real test came in the Caboolture dusk to dawn six-hour run relay. This had kicked-started my season for the last three years with good returns in my two-hour leg of 26kms or more.

Things went well for the first hour, 4.15 pace, but it dropped off significantly and I finished the second hour doing 5.15s. And my feet hurt like hell. My head was also down. I knew something was not right.

I had mentioned to Coach T the previous week about the option of changing Cairns from the full to half. Caboolture confirmed that thought process. He liked the idea too.

A relatively poor recovery only made things clearer.

A diagnosis from my long-term physio said I had plantar and tendinitis issues in the left foot, although not severe. Just more stretching required.

His worst line was possible nerve damage in the pad/ball of my right foot and a word not even I could pronounce: metatarsalgia. It felt like a knife being jabbed in just under the middle toes at the start of runs, although disappeared quickly enough.

Anti-inflammatories and rest was his best advice. And an x-ray to ease the mind about a possible stress fracture, although this seemed very doubtful.

I reluctantly passed on the information to the bosses and it was all over Facebook in seconds. Damn modern technology. And yes Taryn had been telling for days, weeks, maybe months to get things checked out properly.

The coach said no ifs and buts. 7-10 days of complete rest. Nothing! I argued for a swim at least and he said maybe, but he has this awful habit of throwing the ball back in your court and making you feel so guilty. So total R and R it was.

I had not run since the previous Sunday, so technically I was already four days into the no running regime. But a hit out at the pool Thursday morning proved to be the last of the tri action and meant a return date of March 3 at the earliest.

And Mooloolaba just a fortnight after that.

Now, almost a week in, I am feeling a bit heavier, plenty of guilt for not training, a bit more motivated, drugged up … but sadly the right foot still hurts a little. Got to get that scan.

Raby Bay Sunday was not easy. Watching … well, it sucks. Even all that rain would not have dampened my race spirits. But I knew it was all for the best.

My advice to my TAQ colleagues is to listen more to that inner being, and your nearest and dearest. Ultimately you know your body best, however we tend to ignore the pain and discomfort. That is just how we roll.

But as rockin Jan Avery-Spoor told me: “Listen to your body, it is the only one you have got. There will always be another race.”

Oh well, should make good use of this R and R and finally unpack my TT bike from the bag from Busso after nearly three months.

Maybe that will bring the mojo back.

Keep training hard everyone … only if you are in tip top condition. Or otherwise come and join me in the sulk corner at the TAQ tent.

Sent from my iPad