My First Half Marathon 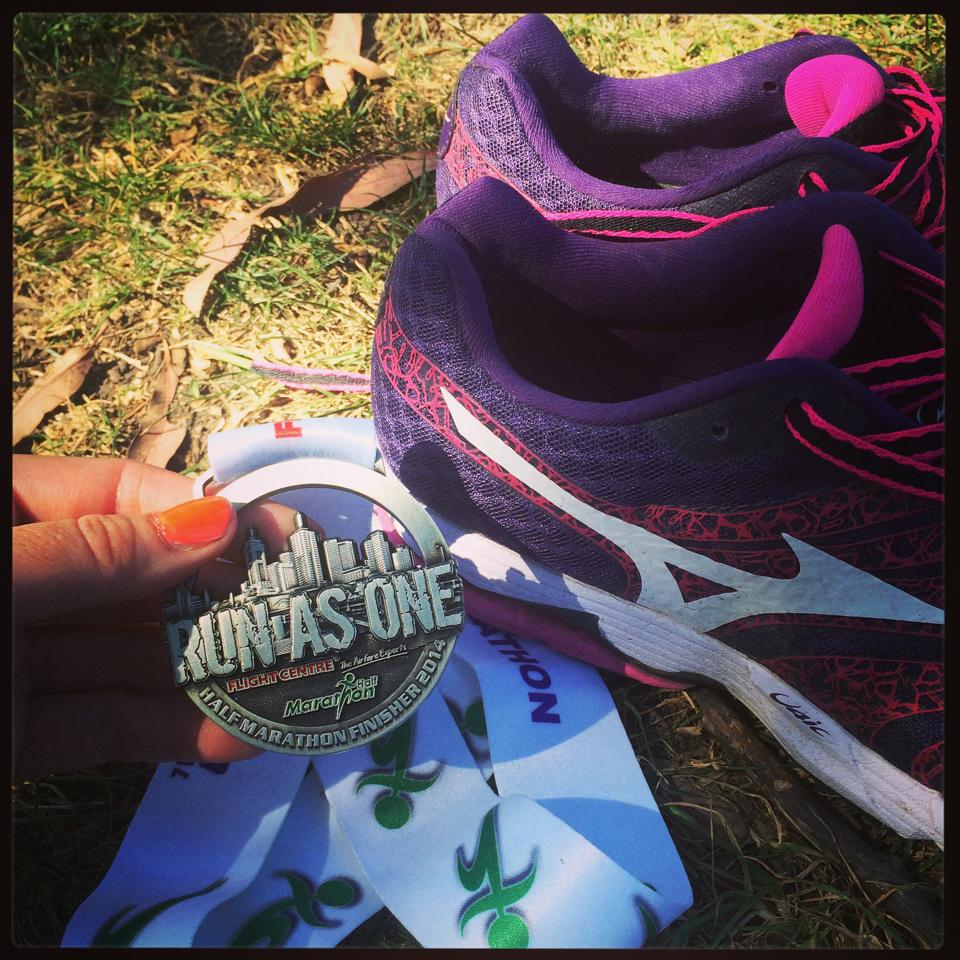 Sunday saw the Melbourne Marathon take place with a large number of athletes racing various distances.  We asked athlete Suzie Latta for her thoughts and race report on what was an eventful first half!

Earlier this year after having a look at my race results from the season it was clear that my run was where I needed to improve. I decided to sign up to a half marathon race to get some k’s and endurance into my legs over winter, plus I thought it would force/encourage me to show up to run sessions 🙂

I spent the winter Sunday sessions running at Fairfield with Coach Greg and the long course crew, as word on the TA street was that his sessions were tough but good. The group was kept together and Greg incorporates some really great strength work early on in the season.

The increase in load was a shock to my system for sure, and when I saw some of the distance for the long runs I did freak out a couple of times. I can’t believe that a recovery run is 14km in some weeks, that’s longer than I’d ever run before!

As the race grew nearer my load increased and I struggled with some injuries and niggles and there was unavoidable time off early on, but working with Greg on my technique and also Simon at Lakeside helped me work through these issues and before I knew it there was only a few days before the race. I’d chatted to Greg about any last minute race day tips and a bit of a race plan. I was hoping to hit around the 2 hour mark which was on track from my lead in event which was the De Castella 15km at the end of August. Greg reminded me to relax, hydrate and keep my head up.

I was extremely nervous for this event, more so than at any of the races I’d done during the season, all I could think about was trying not to throw up. There were so many people, it was crazy. When the gun went off it was pretty hard to find your own space to run in and find your rhythm. I started off with the 2 hour pacers and kept with them until about the 8km mark. I had a few gut issues and couldn’t keep my gels down so I had to ease off the pace a bit to try and settle my stomach. I walked through the next aid station to try and sip some water and hydralyte slowly as I thought it might help calm me a bit. I kept plugging away and it was great to see some TA support out on course, it makes such a difference. There were also some random supporters handing out lollies, I thought I’d try one of them to see if I could keep it down. But unfortunately it just made me feel worse.

My plan then changed to walk through aid stations to get some water & electrolyte in without rushing it so I could keep it down and stay hydrated as it started to get pretty hot out there.

The run back up St Kilda Road seemed to go really quickly which I was grateful for by this stage, the support along here in both directions was fabulous. Lots of high 5’s from everyone and some brilliant signs.

The last km seemed like a bit of a gauntlet, there were quite a few athletes who’d gone down and were being treated by medical staff along the sidelines. I was a bit jealous of them lying down to be honest! I was pretty desperate to stop, but then I remembered I wouldn’t get a medal (I really wanted a medal!).

Another runner started walking just as I did and we looked at each other and decided to run/shuffle together, we kept each other motivated through the last bit of the race, at one stage due to the different finish lines the half marathoners had to turn around and do another bit of a loop. It was mentally tough, so close…. but yet, so far!

Finally the finish line was there and I was done! It was a relief and once I got my prized medal, a drink and took my shoes off I instantly vowed “never again” but that’s probably a lie. I’m already half thinking about the Sussan Fun Run in December but it will depend more on how it sits with other races and I don’t think it’ll fit in very well.

Overall my aim of getting more k’s in the legs and being more consistent with my running has had the desired outcome. I’ve taken about a minute off both my 5 & 10 k times over winter. I really enjoyed most of the training – not so much soaking in Fairfield, there are definitely slimy creatures that live in that river!

Taking on a longer event whilst being short course was a bit of a risk and it’s not for everyone. It’ll now be a matter of getting my recovery right before I take on my first Olympic Distance Race in Noosa in a couple of weeks! I’m glad to have ticked the box, got my medal and had a few celebratory beers. But back to short course for me for the time being… (famous last words!) Great work Suzie 🙂 Race Results for athletes below (apologies if we missed you):