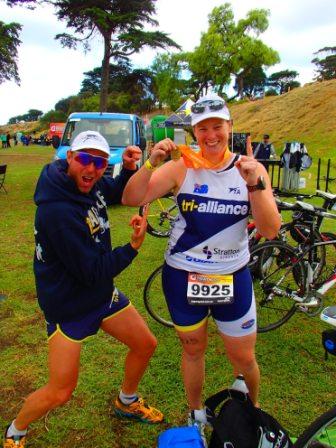 Portarlington is host to one of the most scenic triathlon’s in Victoria. Laid back seas side town, beautiful coastal views, friendly locals. You couldn’t pick a better location for Race 5 of the Gatorade Active Feet Series in Melbourne.

Team Tri Alliance loves having this race on the calendar – we’re sure more for the weekend away than anything! 😉 But regardless of the motivations, our athletes always turn up in force and put on a good show for the spectators.

59 Tri Alliance athletes raced in total, including 33 in Gatorade Sprint, 14 Active Feet and 12 Long Course. We finished with 10 podiums over the three distances, with a further 13 more athletes in top 10 places and loads of first timers!

Well done to everyone who raced and a big thanks to those who came down and cheered.

Our newest athletes in the Active Feet probably had the best conditions of the day. It was early enough that the wind hadn’t picked up, and the rain stayed away. We had 11 compete in this distance including some of our newest TRY-the-TRI group thanks to coach Bdette getting them super prepared for the race.
And it was great to watch our athletes come out of the water – with the super shallow swim exit, the preparation with purposing came in very handy and they made up plenty of places! Well done everyone!

GATORADE SPRINT DISTANCE: 800m/26km/8km
Some impressive results coming out of the  Sprint distance this weekend, with the longer distance playing to some athletes favour, while others had more work to do out of the water to chase down their competitors.  33 Athletes raced with 5 podium finishers and numerous first timers.

LONG COURSE: 2km/80km/20km
Less than ideal conditions on the bike course for our Long Course athletes made for a tough day out. The wind picked up each lap and it seemed 20 of the 26km of the 3 lap loop was into a head wind. Top work to everyone for keeping their head down on the bike and getting the job down.