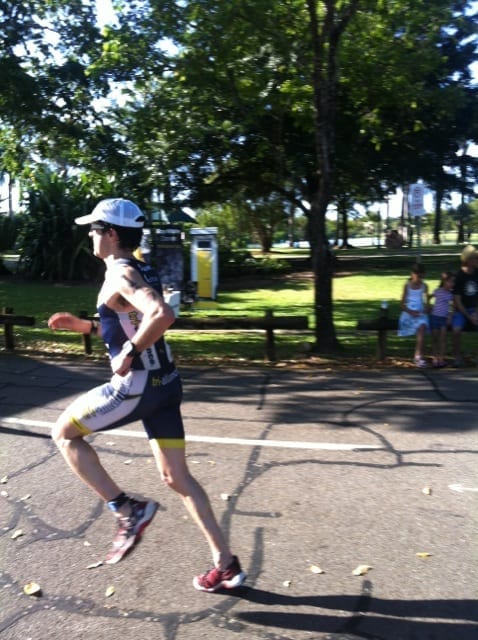 It was a great experience going up to Darwin to compete in the recent Northern Territory Sprint Distance Championships, one of the national qualifying races for the World Championships in Edmonton, Canada.

This was the second time I have raced in Darwin, the previous time being an Olympic distance race, at the Arafura Games in 2009.

This time, and also in 2009, the swim was held in Lake Alexander – a salt water lake which lies only several hundred metres from the beach/ocean. Even though crocodiles are well known to swim in the beaches around Darwin, apparently the higher salt content of Lake Alexander is too harsh for crocs! Another benefit of the salt content is the increased buoyancy, which is always welcome, particularly in a non-wetsuit swim.  The water temperature was akin to warm bathwater, and the outside temperature was around 28 degrees at 7:15am.

The bike course was a fast two-lap course, with a total distance of 26km. The run was a one-lap 5km course. Temperatures were around 32-33 degrees during the run leg.  Despite the heat, there were nice sections of the course through canopies of trees providing much needed relief from the strong sun and high temperatures.

In the end, I had a great race and finished 2nd M40-44 to secure big points for my challenge in qualifying for the Sprint World Champs in Edmonton in September this year. This was my first time on the ‘podium’ but wouldm’t you know it, they didn’t announce place getters at the event, and so medals only given to first place!
I was also in Darwin to visit my brother, his wife and my little niece, for her 2nd birthday – so is was a great weekend in the top end, and a great day for 2nds! !