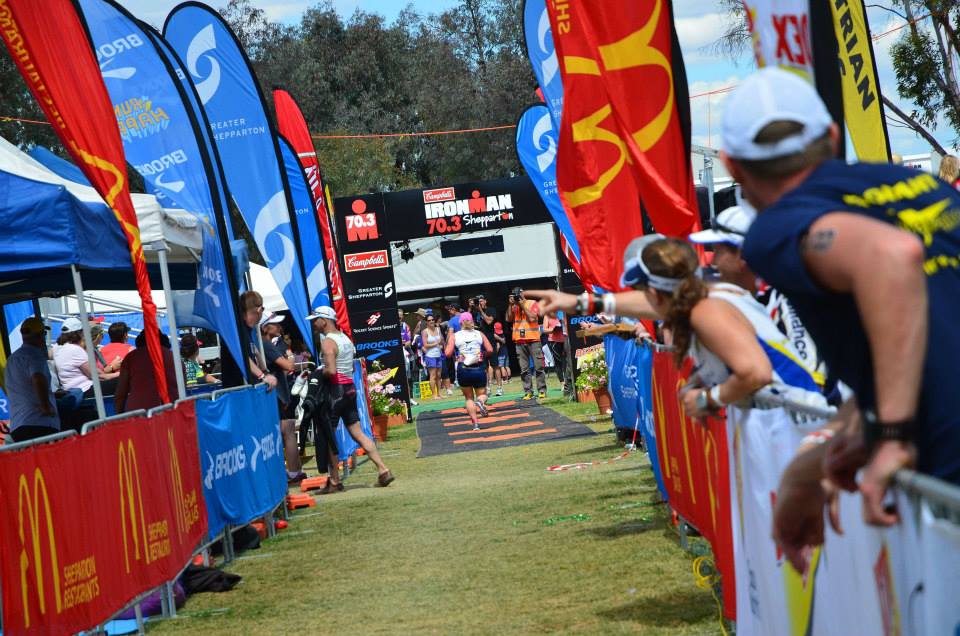 47 Tri Alliance athletes, 1 great days racing! The Shepparton Half Ironman did not disappoint again this year. From the fantastic Competitor packs, the support events on Saturday including the Rocket Science Open water Swim and TriKids event, to the finishers medal and towel. This event is one of the only Half Ironman races put on for triathletes by triathletes and you can truly appreciate the time, effort and dedication all the volunteers from the Shepparton Tri Club and Community of volunteers put in to make this race a truly amazing event. A must do on the Long Course Calendar. So thank you once again from all of us at Tri alliance.

What a day race day proved to be, the weather was magnificent and the crowd that showed up for the event appeared to be one of the biggest that Shepparton has delivered over the fifteen plus years of racing, very vocal and understanding of the great sport of triathlon. The Tri alliance army was there in full force to not only support our own athletes but cheer on anybody and everybody during the race an across the finishing line. A big thanks to all those who made their way to Shepparton to support.

Down to racing and what a day of racing it was! From our First Time finishers, Personal Bests, podiums and the odd hard luck story as their generally is in Long Course Racing. But the weather was magnificent, with only light winds and the temperatures in the mid-twenties, you couldn’t ask for a much better day.

The Swim
A new trial of race wave starts meant a bit more space in the swim, but also meant that earlier wave starts had to fight their way through waves of traffic to make their way to the swim finishers shoot. Water conditions were murky as usual and the sun played a little havoc with sighting, although if you’re following the pack it’s easy enough to tack onto some feet and only hope that they are swimming straight. 🙂

After a solid few months in the pool we saw some great performances from our Long Course specialists.

Natalie Methvan, had our fastest swim time of 30:30, followed by Simon Madden 30:31, Jody Biddle setting himself up for a great race with a 31:26 and Sarah Grove making her way around in 31:27 and Chris Mutimer who has improved out of sight with a 32:48.

Our fastest swim of the day though went to our Team Swimmer Brenton Ford in a slick time of 23:15 which was the fastest age group swim time. There were loads of athletes coming in around the 35min mark and plenty having PB swims including great swims from Evalin Ling, Tim Watts, Steve Akins, Michelle Grocock.

T1
Although transitions aren’t as important as over the short course distance, the minute or two saved in transition can mean a big difference when you are at the pointy end of the field. Our fastest out of transition were Tim Grant and Sarah Grove in just 1min30sec, Jody Biddle, Greg Nugent and Nat Methven also fast times continuing the great start to their races. There was a large handful of athletes spending more than enough in transition (over 4 min – with our longest 8.30min!) – looks like some time spent on transition work with our short course athletes could help here. 🙂

There was little breeze, although there was still enough of it around the course to keep athletes honest the whole way. The hardest part on the bike though is keeping your distance from other athletes to ensure you don’t land yourself in the ‘sin bin’. We didn’t hear of any reports of our athletes being yellow carded though, so that’s always a good sign!

With little wind, there were some solid times for athletes who had been putting in the hard work, and a few unlucky athletes with punctures and mechanicals – but credit to everyone, they all got back out and finished.

Coach Ollie out of retirement had the fastest bike split with no training in 2:25.16, but not far off that was Tim Grant and Jody Biddle who both clocked sub 2:30. Michael Grau-Veliz, Steve Akins and Cameron McConville and had solid times also coming in under 2:35. In the girls, Nat, Sarah and Catherine Allison were all within minutes of each other, Chris Dixon, Bo Kristofferson, Sean Helmot, Jed Shiels, Greg Nugent, Darren Schonewille, Rowdy and Simon Madden all clocked in under the 2:45min barrier also.

In the teams, Ryan Bourke had his first look at Half IM racing and clocking a 2:14.51 over the 90km and Steve Hollingsworth had a solid ride for his team in 2:30.34.

Some hard luck stories on the bike included Luca Montebelli in his first Half IM that incuded 3 flats! A big thanks to the crew at CBD Cycles for assisting him on the day. Dave Burton who broke a spoke and had to wait around 15min for a change over, then proceeded to get another on the second lap, luckily he could continue on to complete his first Half IM.

Brianna Scarlett in the teams event also had a flat in the first 1km of the bike which left her bruised and battered on the ground, but the feel good story of the day – another competitor who was walking back with a rear flat and pulling out kindly handed her his front wheel for her to continue. Top bloke award right there! And well done Bree on getting back on and finishing for your team.

T2
The trend continued with those fastest in T1 showing they could replicate this in T2 including Sarah, Tim, Catherine, Jody, Dicko, Nat and Cam all in and out in less than 2min. There were a few more opting to take their time in preparing for the run leg though, incuding Greg Nugent who enjoyed the port-a-loo’s for a little too long (5.03), and Michael Gallangher having a full wardrobe change (7.55) to take honors in this category. 🙂

Is where a race can be won or lost – and often shows where the hard work has been done. Catherine Allison had the race of her short career (second Half IM) running a 1:31.57 and chasing down her competitors to win her age group.

Cameron McConville fresh off a plan from Germany smoked the run course also in his first triathlon in more than 5 years after retired from professional v8 Supercar racing to finish with a 1:33.30.

Sarah showed that her post Kona endurance was still there to hold her 6th place position running a 1:37.44, with Jody Biddle having what we are dubbing race of the race to run a 1:38.26 to finish his fastest Half IM race and showing he is ready for Busso in less than 3 weeks time!

Tim Grant had a stand out performance also clocking a 1:44.17 and shaving 14min off his Half IM PB, and Kerri Whitney also had a massive PB finishing with a 1:45.28 run.
Chris Dixon, Michael Grau-veliz, Sean Helmot, Malcolm Kemp, Simon Madden, and Greg Nugent all put in solid run performance coming in under 1hr50min to finish off their races strong also.

In the Teams Xavier Flynn completed his first Half Marathon in style finishing in 1:22.27 securing a podium place for his team

Starting with the girls:
We had 10 females race,

We had 25 males take on the race, with solid performances all round

A special shout out to all our wonderful supporters and athletes, there is no doubt that being a part of the Tri alliance family adds to the great experience of race day, you never know when a voice in the crowd will shout out “Go Tri alliance” or ring one of those cow bells. So well done to everyone who made the trip!

Click here to view a selection of pictures from the race

Read more about the Shepparton Half Ironman. Entries for next year will open soon.