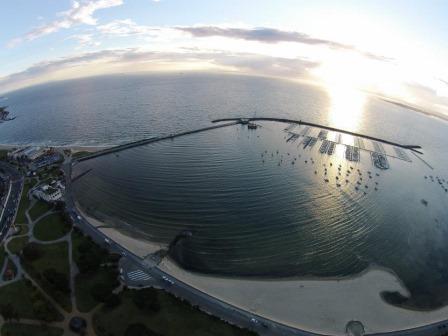 “I just had the best first triathlon I could have ever Imagined! I had my own big race tent that I shared with the best people! It had bean bags, warm up spin bikes, Masseurs from Lakeside, a safe place to put my belongings and a fast cook. Everyone was there, I even meet an Olympic Medalist Erin Densham. I will be joining Tri Alliance and enjoying my triathlons for years to come. Thank you!” David Osborne. David was part of our 6 Week Coaching Clinic leading into the first race of the Gatorade / Active Feet Tri Series and was one of 98 Tri Alliance athletes who raced on Sunday 24 November.

The first Race of the Gatorade Active Feet Tri Series is always much anticipated. Athletes have been training solidly all winter, and apart for a few lower key races and duathlons, most are ready for their first test of the season and we always have our biggest group of beginners starting out and ready to take on their first race. With Long Course races Shepparton and Busselton so close to this race, this one tends to be left to the pure short course enthusiasts with our Long Course Athletes enjoying watching and cheering from the sidelines. So thanks to those who gave up their Sunday morning sleep in to came along and cheer.

Everyone was pumped for the day ahead even with the looming clouds, and after meeting and chatting with Olympic Medalist Erin Densham the day prior, athletes couldn’t wait to get out, enjoy the race and give it everything on the day. One experience that Erin learnt during her career and shared with our athletes, was to learn how to always give 100% in a race, “At times I may have only been feeling 80% on the day, but I would give 100% of that 80%” she shared. A great lesson to put into play.

Race morning, we didn’t know who was more nervous and excited – Coach Bernadette or her 50+ new Beginner Athletes racing their first race! Well done to each of you – we can’t wait to continue the journey into the remainder of the season! Coach Bdette shares their journey with us:

“Over the past 5 weeks, the Tri Alliance Coaching Clinic has been running with around 50 participants who have signed up for the Gatorade/Active Feet Triathlon series. The group of enthusiastic athletes have battled some tough weather conditions over the last 5 weeks, so were prepared for the cold and rough conditions they faced at Race 1 on the weekend.

A big congratulations to all of our participants who participated in the program, putting their heart and soul into learning new skills and achieving big goals. Well done!”

Jelly Belly Kids Tri
To start the morning, the day kicked off with the new event the Jelly Belly Kids Tri. The chance for young kids to get out and have fun and learn the sport of triathlon. Tri Alliance had a handful of eager kids race including Sonia Gregoul Son Oscar and Ambassador Lance Willies Son Xander. How cool it was watching each of them sprint to the finishing line with huge smiles on their faces!

Active Feet Fun Tri
Next up was the Active Feet Tri and we can safely say that these guys had the roughest conditions of the day! The wind was horrible, the rain started to fall and the waves were huge – made even bigger knowing that most of those lining u on the beach were knew to triathlon! So a huge well done to everyone in the Active Feet Races – including our 12 starters. Top work also goes to our podium finishers:

Gatorade Sprint Distance
Overall we had 86 athletes race in the Gatorade Sprint Distance (there were probably more, but unless you choose Tri Alliance as your Club we may not find you!). We had a number of podium finishers, big PB’s already from the same race last year and first time sprint athletes amongst them too. Plus there were a few lessons learnt and a couple of hard luck stories as well. But overall a super race – well done to everyone on a great first race of the season – we look forward to seeing you all refuel, reset and refocus for Race 2 of the Gatorade Series at StKilda in the New Year!

The fast and furious

Highlights
View highlights from Sunday’s race below thanks to Aus Sports TV.