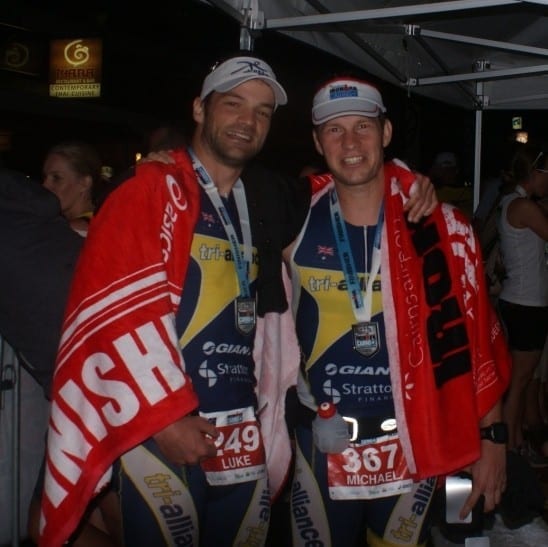 In the lead up to race day we weren’t 100% sure what the weather was going to deliver with a mix of sunshine, wind, rain and humidity. Though once the sun rose on Sunday the 9th of June we were treated to a spectacular morning with calm conditions out on the water. 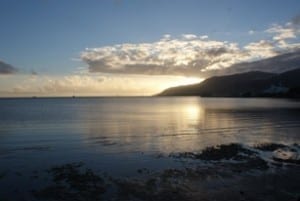 Calm conditions await the start of the swim leg.

Thanks to Adam King the Tri Alliance tent  was set-up at the finish line and was filled with 60 nervous athletes waiting to get started on a long day.

The 70.3 team was off first with Chris Bierton and Merinda Eckart leading the swim leg for the TA team. Once out on the bike the wind immediately picked up and combined with pockets of heat, showers and the ever present humidity it made for some challenging conditions.

The TAQ athletes showed their commitment to their cycle training with some strong cycle times posted. Despite bike issues that restricted her to only 4 gears, Sarah Jones rode a quick 2:43 which ultimately placed her 5th in her age group.

The Cairns 70.3 run course consists of an exposed flat run through the corn fields back into town. It is deceptively brutal and this year the weather added a headwind to contend with the whole way. Not to be outdone we posted some great run splits with Chris Bierton showing his class to produce a 1:34 with Nic Savage and Taryn Swan both running 1:45.

In the Ironman event we had around 35 athletes racing including some of the online team. For those spectating it was a very exciting day with huge PBs posted and ecstatic athletes, coaches, friends and family. Here’s how each of our athletes performed:

Chris looking strong on the run.

Chris Bailey: Third place in the men’s 35-39 age group, pb of 9.21 and off to Kona for the first time.  Did it balancing a high pressure job, a young family and no more than 12-14 hrs training per week. Didn’t waste a second of his limited training time which meant he had a blinder.

Callan Lloyd: A 71 min pb of 9.40, 5th place in the 25-29 age group and only 14 seconds of a Kona spot in his second IM.  Has a huge natural motor and has only fast times ahead especially once his improving bike matches his great swim/run combination.

Robbie Andrews:  Another one of our online athletes under the guidance of Stephen Gage.  Did his last IM 8 years ago and had a great day on Sunday winning his 45-49 age group in 9.50 and off to Kona for the second time after going there way back in 2003.

Stephen Gage: Our head on line coach again went under 10hrs for a 9.58.  That is 9 x IM races all between 9hr 10 and 9hr 58.  Achieved another Hawaii qualification spot achieved but he is unable to go this year so let it roll down.

Marina Jurveyic: From Tri Alliance in Victoria Marina attended our Noosa camp as part of her preparation and became a popular member of the team.  Was the fastest female age grouper of the day and 5th place overall with a 10:00:13.  Simply awesome!

Tim Franklin: A huge breakthrough race in his 4th IM race.  Came through with a 90 min PB of 10:11 and run time of 3:31.  The next step is a sub 10hr which and one day achieving his goal of a Kona spot.  Shows that with hard work and persistence anything is possible.

Mike Zink: His first IM race and 10.26 result was one of the very impressive results to come out of the day.   Prepared very well and he really enjoyed the whole IM experience.  Mike has some big goals for the future and we have no doubt he’ll achieve them.

Simon Crook: New member to the squad and a solid day of 10.31 despite a calf injury than hampered his training.  A sub 10hr is on the agenda for the next race with his abilities.

Mark Gleeson: A pb of 10.35 put to bed the disappointment of Busso when he was sick.  Was solid across the swim, bike and run and will look to go faster in his next IM at Melbourne.

Luke Horsfield: A 10:52 in your first IM race is a fantastic result and Luke looked consistent all day. Battling lower leg injuries for the last 6 -8 weeks of his campaign and restricted to water running a 3:56 marathon time shows that anything is possible. 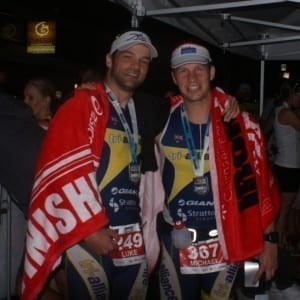 Mick Ryan: One of our first time IM athletes and had a great day to cross in 10.58.  Did everything right in training which meant the race plan worked a treat.

Kit Rix: Tri Alliance on line athlete under Stephen Gage and former Brisbane member before he was transferred to Mt. Isa in the Police Service.  Had a great race to record a PB of 11.02 despite being based at Cloncurry the last 6 weeks leading into the race.

Ben Anderssen: His third IM and a 30 min pb to finish in 11.20.  Did not miss a beat on race day and looked as though he could go again.  A sub 11hrs is on he cards if he decided to do another one.

Amanda Lucas: If there was an award for courage she would win.  Her first IM and after badly crashing early in the bike leg she bravely got back on the bike and finished the race.  Her post race injuries were most unpleasant to see and to think she still posted a 11:24 with a sub-4 hour run is a testament to her courage and ability.

Adam King: Proved it’s possible to smile from the start gun right through to the finish line. Had a great day out on course and superseded his expectations with an 11:31 finish time for his first IM. Special thanks to Adam for helping freight the tent up for race day.

Bronwyn Vincent: Debut IM in 11.48, 7th place in the 40-44 ladies and a great day out.  If she decided to do another IM will definitely be pushing for top 3 and a Kona spot, lots of potential. 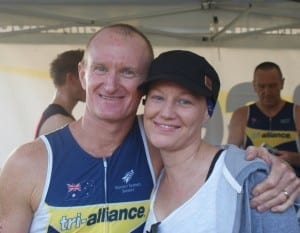 Steve Davy: Not only one of the nicest guys you’ll meet but one of the toughest trainers. Steve had an enjoyable day out on course and didn’t miss a beat to break the 12 hour mark and finish with an 11:52. With fellow TAQ member wife Marnie cheering on from the sidelines, this was a great finish to a first IM.

Nathan Dick: Looking in solid form all day Nathan posted an 11:55 to sneak under the 12 hour mark and finish his first IM. Only smiles all day, we look forward to watching Nathan line up at his next one.

David Beaton: A great result to finish his first IM in 12:04. Fairly new to the sport, David showed his potential out on the course by looking strong all day. Congratulations on a fantastic first IM!

Blair Venn: Now an IM veteran Blair did not have the same lead-up to Cairns as his other Ironman events so he set himself two goals.
1. Finish the race.
2. Beat Chris McCormack out of T2
Blair achieved both in style. Finishing his IM in a respectable 12:24 and not only beating Macca by 4 seconds in T2 but having the 3rd fastest time of the day with a smoking 1:01!

Richard Fairhead: After a couple of years off Cairns was a return to IM racing for Richard. Consistent all day Rich finished with a time of 12:25.

Jarrod Williams: With a few long distance events under his belt this was Jarrod’s first IM in a time of 12:37. A consistent racer, no doubt it won’t be long until Jarrod signs up to his next event.

Trevor Wantenaar: Wins the award for the most compromised training schedule with frequent trips away from home required through work. Showed his grit and determination on race day to finish with a 12:39 in his first IM.

Cameron Dwyer: Another first time IM finisher with a time of 12:43. One of the stalwarts of the squad it was great to see Cameron having a great day out on course.

Paul Williams: Sneaking under the 13 hour mark Paul finished with a 12:58 in his 2nd IM. Always looking for his next challenge and with the backdrop of the Gold Coast to train on it won’t be long until Paul is signed up to his next one.

Andrew Reilly: With a young child at home and the demands of his own electrical business Andrew did well to fit in his IM training where possible. Andrew has shown a commitment to improving his swimming with TA over the past 2 years and what an accomplishment to get through the 3.8km swim a very respectable 1:25. Not only that but Andrew managed to find his way into the ambulance at only 3km into the run leg but managed to get back out again and finish his first IM in 14:43!

Michael Harvey: Possibly the tallest member of TAQ, Michael came back from not finishing the bike leg at IM Melbourne this year to finishing IM Cairns with a time of 15:16. Always looking in good spirits the TAQ team were ecstatic to welcome Michael across the finish line as he became an IM for the 2nd time.