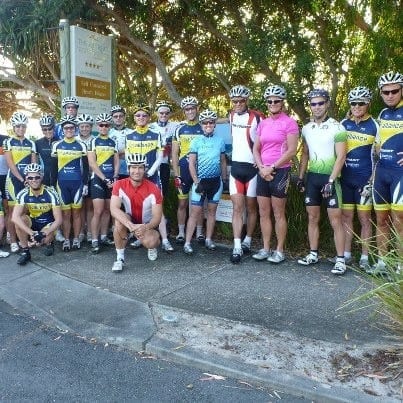 (aka “When animals attack”) 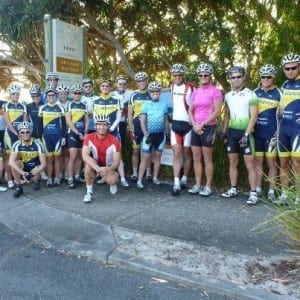 Day one: all smiles from the TAQ IM
team

Day One saw 23 eager (and relatively rested) athletes arrive at The Retreat at Perigian Beach ready to go. Nestled in the heart of the spectacular Sunshine Coast, The Retreat was to become TAQ’s official HQ for the next 4 days.

The first session on the schedule for the day was a 4 hour aerobic group ride down to Caloundra and back with a “relaxed” 1 hour individual time trial pacing effort included on the way back (just, it was said, to “kick start the legs for the weekend”). Group 1 was joined by Tri Alliance Queensland’s newest coach and Sunshine Coast resident, Stephen Gage and his wife Danielle. After some quick introductions, and a pause for the traditional pre-camp group photo, the three bunches headed down the road.

With Supercoach Suz in control of group 3, we settled into a nice rhythm cruising south

The “light” afternoon tea on day 1 was
just a sign of good things to come from
our talented caterer and camp “mum” for
the weekend Rindy.

along the beautiful Sunshine Coast. After a quick pit stop at Caloundra, the bunch did a uturn and headed back up the coast towards Perigian. It was then that we got slapped in the face by the head wind. Perhaps the cracking pace we had set with ease on the way down the coast was not due to our spectacular form, but rather the generous tail wind that we now had to battle through to get home?! Needless to say, the final hour long individual time trial effort was nothing to write home about.

After a quick breakfast, we checked in to our accommodation, dumped our bags, and headed off for session two: a 45 minute open water swim at Noosa main beach. The on-shore winds had picked up during the morning, making for choppy conditions and a challenging strength-focused swim, with a couple of jellyfish stings thrown in by Mother Nature for good measure. Back at The Retreat, our camp “mum” for the weekend, Merinda, had been baking up a storm and we arrived back from our swim to a “light” afternoon tea spread of home made quiche, slice, fruit salad, yoghurt, pikelets, and fresh banana bread hot out of the oven. Having stuffed ourselves silly, we were soon off on our third session for the day: an hour out and back run along the Perigian Beach coastline.
Run, quick shower, and it was time to eat (again!). 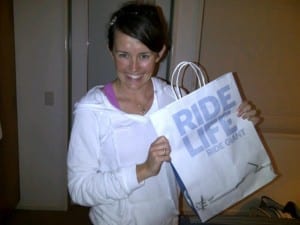 Pretty stoked with my goodie bag!!
If only there were a spare set of legs in
there as well …

Day one finished with the delivery of our Giant Bicycles camp bags packed full with goodies to help us through the weekend from Shotz, ASCEND, Rocket Science and Stratton Finance – thanks guys!!

Day 2: “Attack of the Jellyfish” 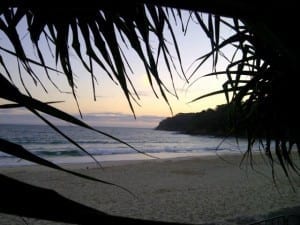 The “before “photo: Sunrise at beautiful Noosa Main Beach – why would you be anywhere else?!

Day Two saw us rise early and head out for a dawn swim at Noosa main beach. We were relieved to find the waters much calmer and more inviting than they had appeared the day before – oh how looks can be deceiving! Continuing on with the Day 1 theme of Mother
Nature throwing mental challenges our way, we soon found ourselves ploughing through swarms of jelly fish (twice the size of those that “attacked” us the day before, I swear).

My take-home lesson from that morning: swimming in swarms of jellyfish does actually improve your stroke rate …as you race to keep your arms in the water for as little time as possible, and get back to the beach ASAP! 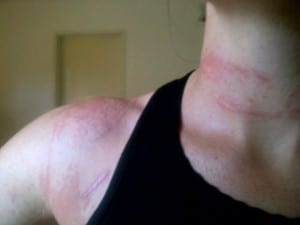 The “after” photo: When Jellyfish Attack!

Back on dry land, it was time for a quick change before heading off for a 2 hour trail run through the spectacular Noosa National Park. Here, Mother Nature made some amends, treating us to the spectacular sight of some migrating whales breaching and playing
in the waters just off the Noosa headland – just breathtaking! Back at The Retreat, it was time to settle in for an ironman race briefing session presented by Head Coach Turner and our seasoned IM WA campaigners of Suz, Gagey, and Brad & Sarah Jones. It was a great opportunity for the team to share their warstories … erm … I mean … provide valuable insight into the Busselton course… 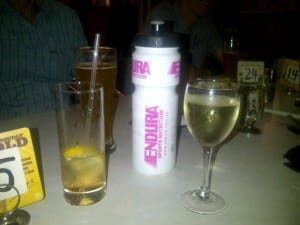 Putting our nutrition plans into practice over dinner at the Perigian Beach Surf Club – I am sure that Sally said to drink the wine before the water …?

After lunch, it was time to head back into the “classroom” for a nutrition Q&A session with our favourite squad nutritionist, Sally Garrard from Apple to Zucchini Nutrition. The one thing that all previous IM competitors I have spoken to agree on is that nutrition is really the 4th “leg” of an ironman, and is a skill needs to be planned, developed, and practiced in training just as much as the other legs of the race. With 140km to 175km of riding planned for the next day, it was a timely opportunity to pick Sally’s brains about bike nutrition and recovery.

In the afternoon, it was time to hit the bike once again for a 1.5 hour recovery ride (because we hadn’t trained enough already!) through the Noosa surrounds and then on to the Perigian Beach Surf Club for dinner. By 8.30pm on Saturday night, all lights were out at the TAQ Perigian Beach HQ – another raging Saturday night for the Busso IM team! 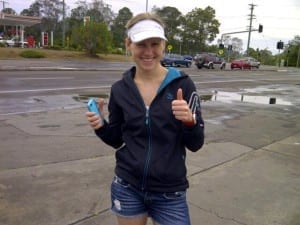 One half of our amazing Eckart-Jones support crew working hard rescuing
stranded riders and keeping us all fed, watered and on the road

As most of us know, Mark Turner is a pretty talented bloke, well practiced in the skill of helping people push their boundaries (or just standing over me at a windtrainer session saying something about good and bad dogs whilst not-so-sublty increasing the resistance on my trainer …). But what few of you probably know is that Mark benefits from divine intervention. Let me explain. In the 47 days leading up to TAQ’s ironman camp, South-East Queensland enjoyed in the longest period of time without rain during spring for over
23 years. The weather gurus declared that the La Niña pattern of rain was over and the El Niño pattern of sun, fun and good times was here to stay.1.

Of course, training in near perfect weather does not build the kind of “mental toughness” that you need to get you through an ironman (or so Mark says ), so good old Coach Turner had a word to the big fella upstairs and the morning of the long ride on ironman camp the heavens opened and it rained. Not just drizzled. Poured. Turner’s response: “This is perfect! It could rain on race day – isn’t it better that we get used to it now?”

And so at 5am we set off, in the rain. To our relief, about 3.5 hours into the ride, the rain eased up and we actually saw the sun. Weather aside, it was a beautiful ride, taking in some of the most spectacular parts of the Sunshine Coast hinterland. It was the kind of ride that makes you appreciate the simply pleasure of riding you bike with a great bunch of people.
That’s not to say, there weren’t challenges. Here is a list of my top 3 lessons from the long ride that day:

175 and 6.5 hours later, I finally rolled back into TAQ HQ … only to drop off my bike and head out the road for a 30 min run.
Food, shower, nanna-nap, and it was soon time for a second “recovery” run. Here Mother Nature struck again: After happily watching half-a-dozen of us run past without even flinching, a local dog suddenly took a disliking to Jonesy and attempted to take a bite out of his leg – try not to take it personally Brad!

Day three by numbers:
Ride: 175km
Run: 2 x 30mins
Magpie swoops: 3
Dog attacks: 1
1 The lawyer in me forces me to note that this is may not b e an entirely accurate description of the meteorological phenomenon of El Niño … if in doubt, google it. 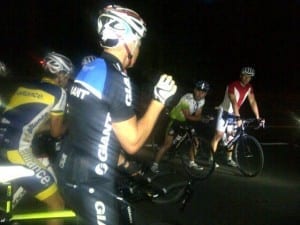 Last day of camp, and at 5am 23 weary athletes kitted up once again to hit the road for a “quick” 4 hour spin around Noosa, Kin Kin and Boreen Point. It was dark. It rained. We were tired. But despite all of that, spirits remained high with the group determined to see out the final training session of IM camp in good form.

The group 1 riders were joined by Michael Barker from Custom Bike Fit for their ride. A veteran of 8 ironmans, Michael specialises on working with triathletes to help them achieve maximum efficiency on the bike and a smoother transition into the run by focusing on bike set up, power, and aerodynamics. Michael had joined us at TAQ camp HQ the night before for a Q&A session focussed on how to best prepare your bike and your body for the challenges posed by the 180km Busselton course. 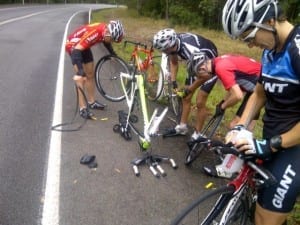 Back in group 2, things were not going so smoothly, with our ride soon turning into an impromptu roadside tyre-changing lesson with both Alan and Suz getting flats (for Alan it was on both wheels!) following the pack’s collision with a beer bottle that had been thrown out of a car window the night before.

Needless to say, we were relieved to see the final sign showing just 4km to go until we were back at Perigian beach. As we rolled back into the driveway at The Retreat, there was a little group cheer to celebrate surviving camp (and the fact that it was breakfast time!). After a flurry of packing, the crew soon bid farewell to the beautiful Sunshine Coast and
other successful Tri Alliance Queensland camp, and hit the road to commence the drive back to Brisbane.

A little post script …
On behalf of the whole crew, thanks to those who worked so hard to make the 2012 TAQ Ironman Camp such a success including our super coaching team of Mark, Suz, Brad, Gagey, Tim O and Gleeso. A special thanks must also go to our hard working, cheerful and simply amazing support crew, caterers and rescue drivers of Merinda and Sarah (and of course, little Miss April who waited so patiently in the rain on Sunday at the first aid stop for the long ride, whilst probably wondering what kind of nut-bags we really were).

Finally, I’d like to say a huge thanks to my awesome training buddies. Training with such wonderful people is the thing that gets me out of bed every morning. Who would have thought doing 21 hours of training over 4 days in the wind and rain could be so much incredible fun!!