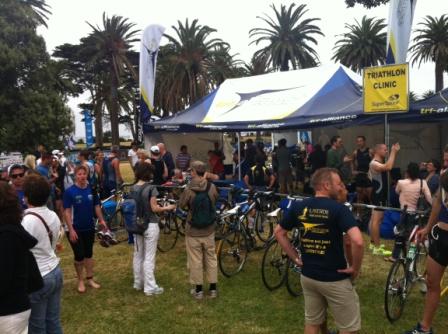 Numbers were slightly smaller than usual after 55+ athletes raced the Shepparton Half IM the week before, but that didn’t stop a group of them coming down and repaying the favour and supporting their fellow athletes. Thanks guys!
Race morning we didn’t know who was more nervous and excited – Coach Bernadette or her 30+ Beginner Group racing in their first race! Well done to you all and you can read how they all went here.
Overall we had over 90 athletes race in the Gatorade and Active Feet Distances (there was probably more but if you don’t have Tri Alliance is your SuperSprint Profile we don’t have your results!) with a number of podium finishers, big PB’s already from last year and first time sprint athletes amongst them too. Plus there were a few lessons learnt from the race. Well done to everyone on a great first race of the season – we look forward to seeing you all back out racing in a few weeks time!

CLICK HERE to check out our full team results. And remember – if you are not in our results then you do not have Tri Alliance as your squad name in your SuperSprint Profile – make sure you login and add this to your profile. Full results from the race can be found HERE.