As we head into the festive season and nudge ever closer to the end of 2013, I feel it is important to take stock and reflect on the year that was.  For me personally, I have enjoyed every second of the athletic calendar.  From a purely triathlon perspective, it has been a year full of wonderful memories; and good times training and racing.  I have learnt a lot; listened to the advice from my coaches and others around me; and grown both as an athlete and as a human being.  Triathlon teaches you a lot about yourself and more specifically what you are capable of if you really want something bad enough.  In 2013 I have exceeded my own expectations and, with that in mind, I am looking forward to what 2014 has in store.

However, before I begin my assault on 2014, I plan on allowing myself the time to refresh, recharge and more importantly, pay back some of the time to the important people in my life.  The longer I am in this sport the more I realise how selfish this sport can be if you allow it to be.  I would not have been able to achieve what I wanted to this year if it wasn’t for family and friends supporting me wholeheartedly.  Therefore, I feel the silly season should be a time to let your hair down and spend time quality time with those close to you.  I have certainly not put the training on hold but rather modified it to include Christmas parties, late nights and the occasional hangover. After all, triathlon is a component of my life and should not dictate the rest of it.  I am really going to enjoy this Christmas and New Year period knowing that 2014 is going to be bigger and better than 2013.

As I reflect on the year that was, it would be remiss of me not to talk about what was probably the greatest athletic achievement of my life to this point. The Endeavour Foundation 500km Road Relay is a three-day event that pushes each and every runner to his or her absolute limit all in the name of charity. Each runner is required to run a minimum of four legs up to a maximum of eight of varying difficulty and distance.  Each running leg ranged from 3km up to 10km, but no matter the distance each and every leg seriously tested your mental resolve.

It started on Friday morning at Mt. Gravatt, worked its way through the Scenic Rim, Warwick and Toowoomba and concluded with a final criterium at Fernvale, west of Brisbane.  At presentations on the Sunday afternoon our efforts were rewarded with a third placing (second if you accept the miscalculation of the organises) that was celebrated with real gusto.  You’d have thought we had won the way we carried on.

On that note, I think it is important that I mention the sportsmanship of the other two teams we were locked in battle with for third place.  First and second place were gone, but Redman Runners and Runners Connexion kept us honest and on our toes all weekend.  It certainly made for an enjoyable and fiercely competitive weekend of running and for that we thank them. 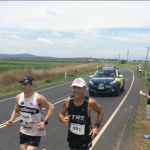 By the end of the relay our misfit team of 17 runners and four exceptional volunteers had morphed into pseudo-family of sorts.  For many of the team we had never met before and by the end of the three days, bonds had not only been forged but friendships had been developed.  For me, getting to know members of the Brisbane squad further enhanced the appeal of the event.  I learnt that our tolerance for pain was heightened when we knew we were running for each other and the overall good of the team.  There is a common misconception that running is an individual sport and although that is the case to a degree, it has its limitations.  As the weekend developed so did our propensity to work for one another.

As Head of Senior School Cross-Country at the school I teach at on the Gold Coast, I have come to realise a couple of things over the years.  Those runners who achieve greater results often have great training partners and a sense of team spirit and belonging.  If they run relaxed with the support of their mates they often achieve more.  This is exactly what happened when Tri Alliance QLD hit the bitumen for their debut relay attempt.  After speaking with my fellow teammates during and following the event, they all felt that sense of belonging and support throughout.  This was no more evident than when the majority of squad turned out for a reunion only three weeks after the conclusion to bask in the afterglow of our success. 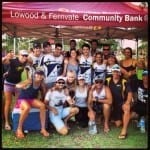 This is an event I would really encourage you to sign up to next year. There is already talk around the club that we may even have two or three teams entering with any luck.  Not only is it something you will remember forever but will give your run training that added boost.  You don’t need to be the greatest runner; you just need a sense of adventure and a willingness to work for one another.

Furthermore, you will learn what you are truly capable of and therefore, help further train your brain and its tolerance for pain.  This was especially true of our fearless leader, Mark Turner, who was just an absolute animal on the run with his blistering efforts.  Whether it was hills, heat, wind – it didn’t matter, he ate it all up.  Watching him smash the 10km ‘Hero Leg’ up Queen Mary Falls just outside of Warwick was awe-inspiring.  In fact, everyone’s efforts were truly inspiring.  Special mention needs to go to Ange Brearley and Stacey Bolton who overcame their running demons and really showed what pure grit and determination can do for your confidence when taken out of your comfort zone.  I’m sure I’ve heard that mantra somewhere before…

Finally, a big thank you goes to Dave Beaton and Nathan Brooking for their filming and photographic skills over the entire weekend.  Their efforts will enable us to relive this experience anytime and hopefully inspire others to get involved next year.  If you haven’t already, click on the links below created by Dave Beaton and Jennifer Stockwell. http://www.youtube.com/watch?v=IQhAMSBxSss

A big thank you goes to Mizuno for providing me with just the most amazing pair of shoes (Sayonara and Wave Inspire 9) for the season.  They received a severe workout over the course of the Endeavour weekend but held up beautifully, in no small part due to the guys at ‘Shoes Feet Gear’ who provided me with a shoe fit and video run analysis.  If you get the chance get on down to Paddington and see the boys.  Their aim is to help improve your technique and performance and get you in the right shoe that best matches your physical makeup.

Finally, Merry Christmas to everyone and a Happy New Year.

I’ll see you refreshed and recharged and ready to take on the challenge of the New Year very soon.  When you are reflecting on the year, be sure to remind yourself that ‘the number one reason people give up is because they tend to look at how far they have to go instead of looking at how far they have gotten.’