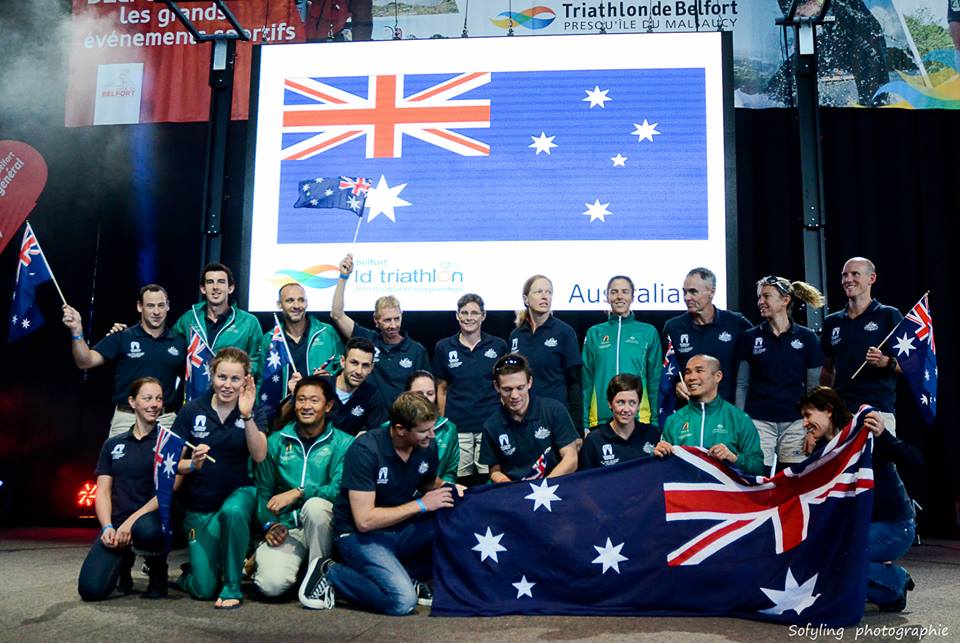 THE LEAD UP
On arrival into France about 5 days prior to the race, the weather was fine, sunny and 18C and the countryside was beautiful.  Belfort is in the North East of France near the Swiss border and T-Shirt and shorts only required once arriving on the train.

After settling into the Australian Team hotel, I quickly worked out that the weather was highly changeable and the forecast for the next 4 days leading up to the race was cold and wet, maximum temperatures around 9C – 11C and rain on most days.  Many athletes came unprepared for such cold weather conditions and the local bike stores and “Decathlon Sports” stores got a real working over.
The Wednesday before the race we got to look over the swim course at the lake and at this stage there was talk it may be reduced to a 1500m swim given the water temperature and forecasted weather conditions.  Three of us took the plunge and did a short 20min swim to get used to the conditions prior to race day.  The water was 13.8C we were told later and although it was fresh and took some time to get any breathing rhythm, it was much colder out of the water with the cold wind.  Nevertheless we were ready for the swim on race day.A steady stream of Aussie athletes arrived over the next few days which gave me a great opportunity to get to know them as we did some light training runs, rides and swims in the lead up.  It takes some time to get used to riding on the right side of the road, especially at round-abouts where indicators are “optional” for French motorists.  Nevertheless, drivers here are extremely patient and give loads of space for cyclists, which soon helped with getting my bearings on how to get around on the roads.

On the Thursday we took a bus over the bike course.  It was not going to be a fast bike course with rolling hills, some small sections of cobblestones and many small towns to ride through with lots of twists and turns (much like you see in the Tour).  And although I knew there was a climb at around the 50km mark of the bike course I didn’t expect it to be as long or as sharp as it was.  It is called Ballon D’Alsace and has been a part of the Tour de France around 20 times.  The bus trip soon detailed the climb, around 10km, average 9% and some sections of 12%.  Weather at the top was horrendous, wet and cold and sleet on the bus window.

Thursday night we got the news that the swim was officially cancelled and the race format changed altogether.  Instead of the original 4km swim, 110km bike and 30km run it was now a 10km run, 90km bike and a 20km run.  Mixed responses in the Aussie camp, a couple of strong swimmers very disappointed, many others glad (mostly athletes from QLD and NT) and a few of us would’ve liked to have done a shortened swim to have completed a triathlon.  Time to change to the race plan.

Thursday night was also the Offical Opening Ceremony where all of the Nations participating were introduced and photographed on the main stage.  We stood out with our Aussie flags provided by Triathlon Australia, it was a great night and very humbling to be a part of the Australian team.

Friday rolled around and it was time to register and drop off bikes.  Transition area was very muddy and the new duathlon format left many questions around T1 bags being available in T2 and what the Race Organisers would allow athletes to wear given the weather, as normally the rules were very clear that nothing was to cover up the race suits.  Sense prevailed and a relaxed stance was taken allowing athletes to cover up and stay warm.

RACE DAY
Finally Race Day was here and it was time to finalise the bike and the transition bags and keep the pre-race nerves in check.  We gathered at the start line of the first 10km run leg and as the gun went off it was a real high to run down the chute and have the crowds cheering for you.  Most tri’s you’ve usually got your head in the water at this stage, thrashing away and you don’t get that same buzz.  After most runners shot off at a frantic pace things settled down and three of us Aussies in the same age group settled into a rhythm and worked through a lot of fast starters.  Two pretty sharp hills presented and these would hurt much more later on in the day but for now we worked over them together and finished the first 10km in around 42 mins.

After a looong T1 of 4min 30sec which included a toilet stop and throwing on a lot of cold weather riding gear not usually required on race day (booties, gloves, long sleeve riding jacket) it was time to get going on the bike.

I felt good on the first part of the ride and found myself passing a few people.  Riding through the small towns was a real buzz as the roads were closed and most people were roadside shouting Allez, Allez, Allez, (Go, Go, Go) and every now and then an Aussie, Aussie, Aussie.  The rolling hills were passing by quickly and I got up and over a couple of the small climbs leading up to Ballon D’Alsace comfortably.  At the bottom of Ballon D’Alsace the road goes up quickly around a number of switchbacks and you can see how far you’ve climbed over such a short distance.  Still feeling pretty good around 3 km into the climb, when another Australian athlete goes past looking strong and keeps on going.  Many riders around me are grinding away and at about the 8km mark into the climb I started to feel a little dizzy and not well in the stomach.  As I ride on I see two other riders on the side of the road, one I later find out with an Asthma issue and another one vomitting as I ride past.  Finally get to the top and the clouds are closed in, the air temperature is freezing and I need to try and settle myself before descending.  I stop, take on some fluids, banana, a gel and some deep breaths before cautiously taking on the downhill that has around 9 switchback turns on wet roads.

After a couple of kilometres and a few hundred metres drop in altitude the dizziness and sick feeling in the stomach went and was replaced by freezing cold.  I took it easy going downhill but many of the European riders flew past some at double my speed, hard last minute breaking and I even saw one guy overshoot the corner and come off right in front of me.  Luckily he had washed off most of his speed when he fell, so was able to hop back on but there were some mad descenders.  At the bottom, the rolling hills continued however they seemed more downhill than uphill and this gave me time to warm up from the descent.  After another 20 or so km’s I could sense the transition area not too far away so started to think about what shape the legs would be in after a ride like that.

After an even loooooonger T2: 7min, again with toilet stop and removal of much of the heavy riding gear I was out on the run and looking to see where the other Aussies were.  Awesome cheering from the Aussie team supporters located at different parts of the run course was great and along with the Coke on course I was starting to feel okay about 8km into the 20km run.  The two hills on the course did hurt and I started to cramp a little on the first lap, slowed had a quick stretch and pushed on.  After lap one it was time to push harder to see if I couldn’t maintain speed or get a quicker second 10km.  Legs felt okay and the run course was awesome going through laneways, a small town, between two lakes, through the forest and it was great to see the finish line, cheered home down the finish shute.  Absolutely stuffed, but stoked to have hit my run target for the second 20km in under 1hr 40.

An awesome experience that I couldn’t have been a part of it without the support, guidance and coaching from Tri Alliance.  To all the coaches – especially Ollie, Sarah, Emma, Lisa, and Greg and the fantastic training companions at various stages of the lead up thank you.  Look forward to catching up with everyone after a break!