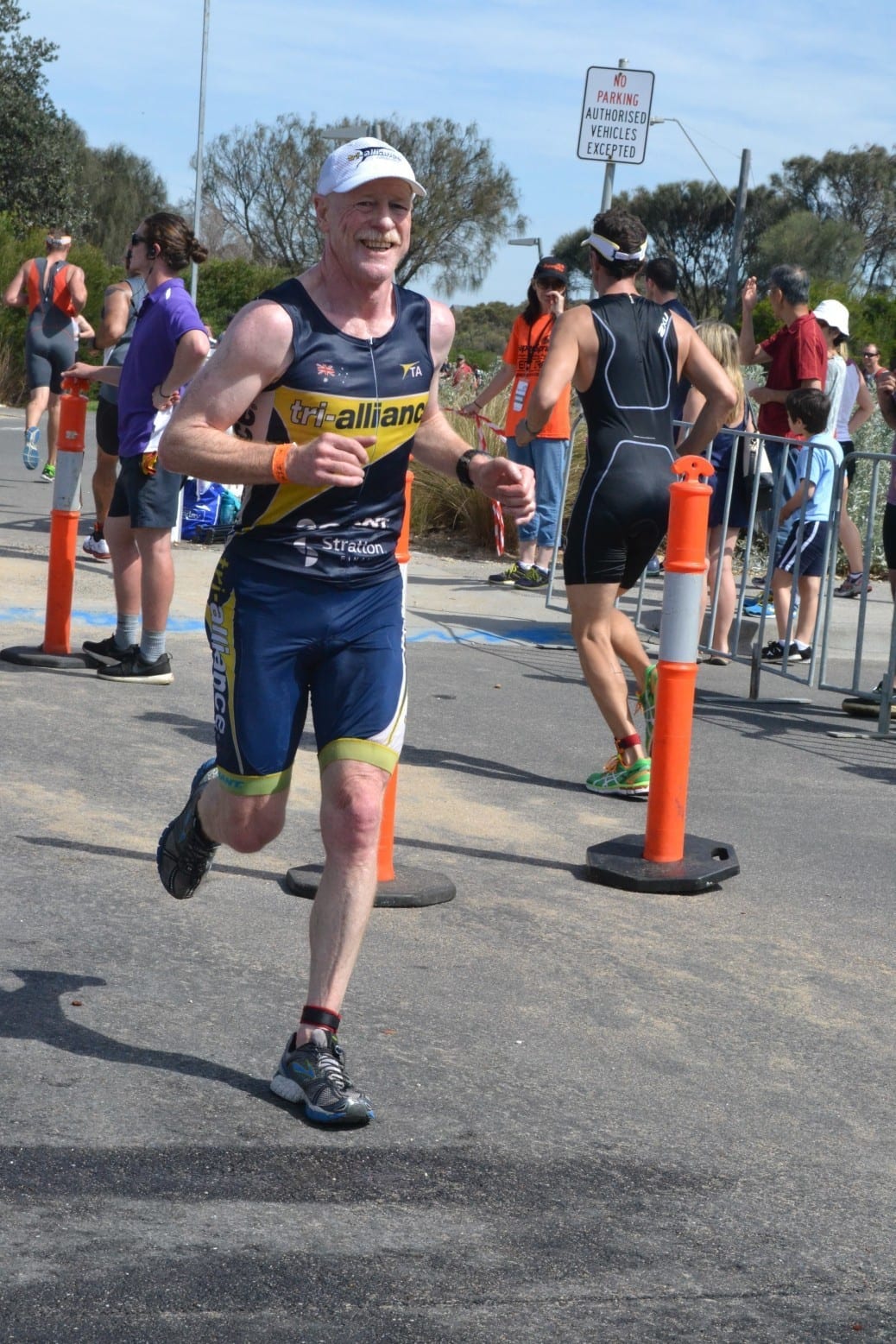 Tri-Alliance Vic Ambassador Geoff Houston gives us his early season report. Coming off the back of competing at the worlds and then racing Noosa – the first of the Gatorade Series was going to be very different but as always Geoff had a smile on his face and embraced it all.

Firstly, a big thankyou to the coaches for supporting me for the ambassador’s role. I’ll do my best.

For those who don’t know me, I have been with TriAlliance for around 3 years now. I started coming to training as a buddy swimmer during the summer combo sessions and somehow ended up doing triathlons. I was looking for something new to do and the friendly atmosphere, the group support (or is that subtle peer pressure?) and the challenge of doing triathlons pulled me in. And it has been a wonderful adventure – new friends, new activities and at least a dozen different ways to spend money on a whole range of sports related accessories. Who could ignore all of that?

Triathlon participation is well worth the effort. After completing my first Gatorade sprint series 3 years ago, it has opened the way to many other possibilities – like Noosa (just give it a go, you’ll surprise yourself), travelling to satellite tournaments at exotic interstate locations and, more recently, competing overseas with the Australian team at the World Championships in Edmonton, Canada. Imagine Noosa, but bigger and with everyone wearing their country’s colours. The Worlds was a huge buzz and a great opportunity to experience our sport at a completely different level. Getting there needed plenty of consistent 6-day-a-week training over about 18 months during the qualifying and pre-race build-up, culminating in lots of nervous excitement on the big day, but followed by a great sense of relief and accomplishment soon afterwards. It was also a chance to take a few weeks for personal travel – 3000km covering the Grand Canyon (yes, it’s that big), Death Valley, Las Vegas, Giant Sequoias, LA and that delightfully quirky Californian lifestyle – epitomised by a nostalgic visit to muscle beach where Arnie’s mentor worked out. Altogether, a bucket load of photos and fond memories.

But, coming back home at the end of September and getting ready for the forthcoming racing season was a bit of a reality check. With just 1 month before the Noosa Olympic distance (not my distance), the body decided it was time to get sick. Yep, immediately caught a bug which took 2 weeks to properly get over and interrupted any remaining positive thoughts I still had about jumping back into training. Bugger.

Noosa was always going to be about just participating and having fun, but a bit a functional training definitely makes it a happier experience. Olympic distance is a nasty little challenge for those of us at the Sprint distance end of the spectrum. However, with one Noosa from last year already under my belt, I felt that I should be able to manage the course better this time. Plus we had an early morning wave start to avoid most of the heat, so what could possible go wrong? Anyway, survived the swim (but curse that current), and the bike went well as I deliberately saved the legs knowing I wasn’t that well prepared. I also took the time in T2 to clean up my feet and put on socks, a lesson my blistered feet learnt from last year – it’s the little things that give us happiness, right? And then came the run. The first 5 kms went surprisingly well – my strategy of walking through the drink stations to take on fluids and give the legs a little rest seemed to be working. But soon after it became a real struggle – how can a mere 5kms be so difficult and where on earth was that finishing line? But eventually it was over – I am sure it was the screaming support from the TA crowd that got me through the last kilometre. Simply standing still at the end never felt so good.

With Noosa done for another year, there now loomed the first Gatorade race at Elwood in just a few more weeks. In the weeks that follow, I also start to realise that I am not travelling so well. Instead of feeling progressively stronger at training, I am feeling flattish, the legs are heavy and I am generally feeling a little unrefreshed. Not to mention the usual range of niggles to attend to. I find this curious, because I reckon I am doing the right things with the training program, with my nutrition and with rest/recovery. Not surprisingly, I am not looking forward to the race and wonder what to do. So a chat with Coach Ollie encouraged me to work harder at rest and recovery, which I do by taking some sessions easier and ensuring I do no training for at least 1 day per week.

It was a beautiful day and absolutely perfect conditions for Elwood race 1, but I was not feeling too confident. I decided that I just wanted to get through the race and see how I felt, so that I could assess what to do next with my program. As it turned out, the 500m swim was comfortable (thanks Eddie), but one of the busiest I have experienced – very hard to find clear water with so many arms and legs going everywhere. I also felt comfortable on the bike, having decided to ride within myself without smashing the legs. Even so, the run was hard work despite trying to keep to a modest tempo. Somehow my split times were good and I was running at a pace that I hadn’t seen for months. This was a big surprise and happy that something was working at last. An even bigger surprise was managing to get onto the podium. Go figure. A special mention to the TA crowd – participants and non-participants – for all their support to the athletes on race day; it really does make a difference.

So, on reflection, there have been some salutary lessons for me about attention to proper rest and recovery. The challenge will be to work out what balance between training and recovery gives the best results – habitually going to 6-day-a-week training isn’t always going to work for you all the time. Ollie thinks there may be an age-related element in there somewhere too, but I refuse to believe this. In denial? You bet.

See you all out there.